Flying with a Cry-baby #MondayMusings

Last week, I took an early morning flight from Bangalore to Delhi for which I had to reach the airport at an unearthly hour. Sleep deprived and tired from the hectic work schedule, I reached the airport on time and requested the lady at the counter to give me a window seat. Thinking of catching up on my missed sleep during the two hour flight, I boarded the aircraft, only to see a young mother with a child occupying my seat. Sitting next to her was her old father (or father-in-law). Without a word I occupied the vacant aisle seat. Yes, it seemed silly to ask her to vacate the window seat for me.

I settled in my aisle seat and dozed off even before the flight took off from the ground, only to be jolted awake from sleep a few minutes later by the loud screams of my little co-passenger. The face of the lil baby was all red and his eyes all scrunched up but no tears trickled down his cheeks. The mother held him close, rocked him back and forth, and softly repeated some words in his ear, but the child refused to calm down and showed us all his super power of screaming really loudly. And as if one uncomfortable child on the flight was not enough, another one wailed from the back seats. By this time, I gave up on my plan to sleep during the flight.

I smiled at the mother and she smiled back with gratitude. I looked around and saw the other passengers having expressions ranging from disdain and irritation to anger and exasperation. And memories of a flight taken some 13 years ago flashed in front of me when a 45 day old baby shrieked and howled in my arms. There was absolutely no difference in the reactions of the passengers between these two incidents which spanned more than a decade.

We all know that babies do what they do when they want to do it. The babies don’t know how to deal with air pressure and the pain it causes or any uneasiness that they might be experiencing. The only way they know to express their pain is by crying. What’s new or different in that? I am sure every single person and their children have cried like that in a public space whether in a plane or a train or a store or a cinema hall or at a restaurant.

While at a restaurant or a store, one can still go out and distract the crying child in some way, but how does one do that while sitting in a aircraft when seat-belt sign is still on? The parents have limited ways  to manage the cranky child.

Oh, I know it can be very frustrating for the co-passengers, after all it is not their child, but show some empathy to the parent who is all stressed and even more frustrated. She is trying her level best to calm and soothe the baby.

Imagine, how unnerving it would be to hear the exaggerated sighs and sense the irritation and stares from co-passengers while your baby is howling, wailing and shrieking his guts out in your arms. How guilt ridden you would be when you know that you and your child are annoying other passengers and some are even judging you for it.

I wish people know that they can’t have library-silent, no-wails-allowed flight. It should not be difficult to understand that a child being a child is not the parents’ fault, and to realize that making someone else feel bad will not make you feel better or improve your flight. So, instead of giving a death-stare to the mother and the child, show empathy, practice patience and put on your noise-cancelling headphones and simply deal with it minus the negative drama from your end. Deal?

Linking this to Write Tribe’s #MondayMusings 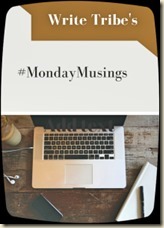