Last evening, KG’s office organized a movie show for the entire team!
And the movie was…Paa! 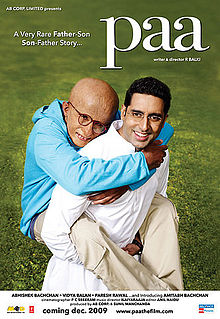 No, I am not going to give away the story of Paa.
All I can say is that this movie is a MUST WATCH for one and all.

Written and directed by R Balki, Paa is a movie which has a lot of rare things to its credit…

The humor, wit, sensitivity, maturity of characters, is amazing. The movie emotionally stirs you and there were not too many dry eyed women (and may be few guys too) in the theatre!
The music is mesmerizing and the dialogues are pack a punch.

This movie should surely not be missed!!

So, rush in to your nearest theatre and experience Paa!