The theme for Thursday Challenge this week is Wooden.
I am picking the wooden blocks game which we play frequently with Aaryan, which is the Jenga. 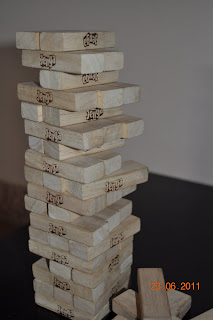 Jenga is a game which is played with 54 wooden blocks. Each block is three times as long as it is wide, and one fifth as thick as it is long.

Three sets of blocks are placed perpendicular to each other till a tower is formed. The game consists of taking one block from any level with one hand and balance it on top, creating a taller and increasingly unstable structure as the game progresses. The game ends when the tower falls.

It’s a game of manual dexterity and mental skills and is sure fun and addictive too!

Have you tried your hands at Jenga??

Starting today, I am gonna do Wordless Wednesday, here on my blog!(Not on all...