I received this book from Blogadda , as part of their Book Reviews Program. 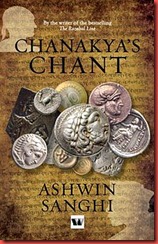 
Synopsis : Chanakya’s Chant is a political thriller which showcases 2 stories running in parallel.

The first story is a fictional account of the life of Chanakya (also called Vishnu Gupta and Kautilya), the great, shrewd, political mastermind of ancient India who uses ‘saam daam dand bhed’ to make Chandragupta Maurya, the king of Magadha; the second story is of a modern-day king maker, Gangasagar Mishra who uses all of Chanakya’s strategies to make Chandini Gupta, a little girl from the slums of Kanpur as the Prime Minister of India.

If you say ‘Yes’ to all the 4 options, Chanakya’s Chant is the book for you.

This is a crafty, well-plotted historical-political conspiracy that flits easily between the past and the present/future. The strategies used by Chanakya, some 2300 years ago to conquer all odds to see Chandragupta Maurya as the emperor, were similarly used by Gangasagar Mishra to make his protégée, Chandini Gupta, the prime minister of India. The interesting part is that the intelligence, deceit, farsightedness, cunningness, ruthlessness, practiced by Chanakya to achieve his ultimate goal so many years ago held true for Gangasagar in today’s times too.

A chapter from the past which is immediately followed by a present day chapter on Ganagasagar and his plans and actions, explains the similarities of the plots and the characters in the two different time zones.

The book is sure full of intrigue and insights… the nurturing and development of young girls into Vishkanyas to kill enemies, the CFC or the Conjurer’s Fourth Card and the opinion polls being similar in nature…

The mechanism of modern day politics machinery is explained in detail and knowing that this is how it works, sure gives some discomfort and outrage. Blackmailing, murdering, deceiving, even castrating a person, all is done because ultimately the end justifies the means!

Liberal use of witty and famous one liners, proverbs and quotations remind you of having read them as status updates on Twitter or Facebook! And the author’s mentioning about these references used in the end, gets my ‘Thumbs Up’.

While the book focuses on the intelligence and manipulative strategies of the two main protagonists, their protégées are projected as slightly dumb (which should/would not be the case actually!) for both Chandra Gupta and Chandini are always asking for detailed explanations for the actions and decisions of their respective gurus.

Though, the story becomes quite predictable after a while, but it definitely keeps you hooked till the last page and the last page is on page number 448!! A big achievement, I must say. So, Chankaya’s Chant is surely a Must Read. Go for it!

This review is a part of the Book Reviews Program at BlogAdda.com. Participate now to get free books!