Last weekend, we were at Shimla for Aaryan’s first exeat.
We alight from the bus and a swarm of taxi drivers surround us, “Sir, local taxi, Kufri, Chail…”
We reach the company guest house and the caretaker while generally chit chatting mentions about Kufri.
We reach the school and the matron asks us if we’d be in Shimla during the weekend. When we said, yes, she suggested, Kufri!
We meet some colleagues at guest house later in the evening and their plans included Kufri too!

Kufri is beautiful during the snow fall, that’s all we knew about Kufri. Since it was just some 15 kms away from Shimla, we decided to spend some time with our baby at Kufri.

After breakfast, we left for Kufri the next day. A journey of an hour or so and our driver parks the vehicle at a spot. We look around and are shocked… it was a chaotic place… vehicles parked haphazardly, a couple of hundred ponies and  throngs of people around which included tourists like us, guides and pony/mule union guys! Throngs of people included a LOT of newly weds!! It was a sight so many of them (women) decked up in jazzy (with beads/stones etc) suits and sarees at such a place!!

After paying for the 3 ponies, we start our journey uphill. It was a dirty, mucky terrain with awful stench of pony shit which got intensified due the slight drizzling since morning! Our pony handler was a 12 year old boy, Kumar, who earned Rs 100 per day for the 10 rounds up and down the hilly terrain. The other ponies sometimes passing so very closely to you or the shrieks of the fellow tourists was nerve racking.

Once the pony ride was over, another sight greeted us… a fair kind of thing and for the entry into this fair there was a fee of Rs 500! And  the attractions in this ‘fair’…

An old woman offers a picture with ‘her’ python for Rs. 20! Don’t fret, the mouth of python was tied with a cloth!! 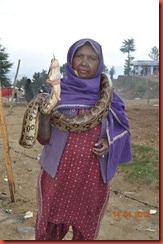 A dozen or more Yaks are dressed and kept ready for you to mount on them and get a picture of yourself clicked as a cowboy, again for Rs. 20. For this cowboy effect, they give a cowboy hat and a rifle! 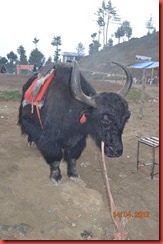 The food stalls speak for themselves! 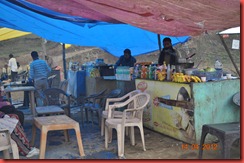 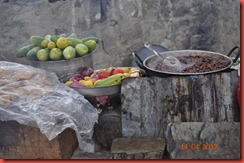 The photographers are persistent in their sales pitch! 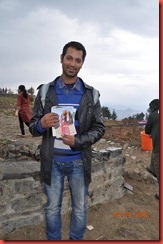 Then there were these shops which sell shawls, stoles, blankets, suits etc. They had a unique sales pitch. They didn’t wanted you to carry the stuff you buy personally, instead they would parcel the goodies to your home! For this they showed the parcel for your buying satisfaction!

The bright spot was a go-carting, which the kid enjoyed thoroughly! 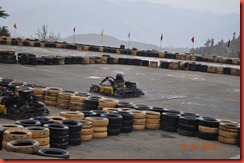 Such hype and such reality!! What a vacation spot!!