The Devotion of Suspect X

Title : The Devotion of Suspect X 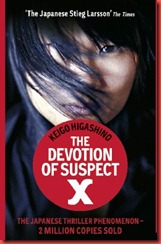 
Synopsis: The Devotion of Suspect X is a story of divorced, single mother Yasuko Hanaoka, who thought she had finally escaped her good for nothing ex-husband, Togashi. One day, he finds her new home and  threatens both the mother and daughter, Misato. Soon, the situation goes out of hand and Togashi is killed.

On hearing the noise, Ishigami, her next door neighbour who is a Mathematics genius and a teacher at a nearby school, offers to help her cover up the murder.

When the police detectives find the body, the investigation starts. Detective Kusanagi takes help of  Dr. Manabu Yukawa, a Physicist and his college friend. Incidentally, Ishigami and Yukawa were together in college too. The police suspects Yasuko while the Physicist believes that Ishigami is involved too. While the story till the murder scene is covered in the first 2 chapters, the remaining 17 chapters is a battle of wits between the Mathematician and the Physicist along with the police detectives and Yasuko.


Review : Usually in a thriller / murder mystery, the story starts with the various clues and as the story progresses, the reader tries to zero on the murderer. But, The Devotion of Suspect X is a bit different. In the first 2 chapters, it is given that Yasuko has killed her ex-husband. So, how is the interest of the reader piqued, till the very end? Well, it builds the story in a way that the reader wonders whether Yasuko will be arrested or not!

The Devotion of Suspect X is a story of murder and the cover-up that seeks to fit murder into mathematical principles. It creates challenging mind game and is like a puzzle. And every page brings in more clues and the reader tries to complete the puzzle. The events unfold very logically and is based on the premise “Which is harder: devising an unsolvable problem, or solving that problem? ”

An interesting aspect of the story is the way the two genius… Ishigami and Yukawa went about in their respective tasks (Ishigami : Covering-up the crime and creating clues and Yukawa : Solving it). Ishigami preferred simulations while Yukawa believed in actual experimentation, which is as per their fields of interest, Maths and Physics respectively!

While the 2 scientists were brilliant, the police detectives lacked that spark which is so very needed in their line of work. What intrigued me was that the police suspected only Yasuko from the very beginning, just because she was the victim’s ex-wife. Since, the murdered man, Togashi was a good for nothing, abusive embezzler, he could have had enemies too. This line of investigation was never pursued by the detectives.

The climax is both chilling and moving. Though I feel that the end could have been a bit different. After all the troubles that Ishigami had to go through and the sacrifices he made for Yasuko, Yasuko could have acted differently!

Also I wish some more was explained about Misato’s attempted suicide.

The story is fast paced and is book is surely Unputdownable!