The weather was sizzling hot and the wind was making it worse. My coach was supposed to come at a place which had no shade. So, went in search of a place to sit in the shaded part of the platform. Standing for a long time, coupled with sweltering heat, I was soon tired and exhausted. I heaved a sigh of relief when I managed to get a small space to sit on a already crowded bench!

The tired legs got a bit of rest, I did what I like doing the most…  observing! And what I observed was a sea of people sitting or lying down, everywhere on the platform.

The platform was so very dirty, with water and god knows what all liquid matter spilled and splattered at most places. Rubbish strewn all over. And the most striking thing was that people were oblivious to all this mess around them.

This child was drinking milk from the bottle, it fell from her hands, promptly it was picked up and the nipple was thrusted again in the baby’s mouth! 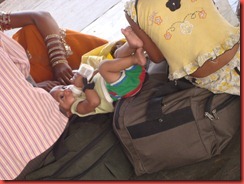 This kid’s mother breast fed her, and in the process, the baby peed on the mother. The mother coolly brushed aside the susu from her sari with her hands, shifted her position and sat just a few millimetres away from the susu, and then spread the susu further away with her sandals, which was lying in a pool, close by! A few minutes later, she smelled her sari, made a face and that was it!

Her husband got cucumbers which were sold nearby, and everybody relished the masala salad without giving a thought about washing hands! A few minutes later, they opened a plastic bag which had chapatis and a vegetable, and had their food. The kids were dropping their food on the platform and promptly picking it up and putting it in their mouths nonchalantly! And none of the elders said anything. In fact they constantly changed the position of their slippers/shoes which lay open near their luggage. While getting up, they would rest their hands on the ground for support…

The cucumber seller was a big hit on this platform. I saw him coming and sitting nearby with a big basket which had some 25-30 peeled cucumbers, a plastic cold drink bottle which was filled with masala and a few newspapers. As soon as he set his temporary shop near me, he was surrounded by customers. He slit a cucumber into 4 pieces vertically and sprinkled the masala from the cold drink bottle and handed it to the waiting customer and charged Rs. 5 per cucumber. Nobody washed their hands or the cucumber! Then a cucumber fell from the basket, the seller, picked it up, wiped it clean with his hands and placed it back in the basket. At times, he would keep the masala bottle on the platform and at other times he would place it on the cucumbers!! And in flat 10 minutes, he was sold out. He went away only to return ten minutes later with a fresh basket of peeled cucumbers and the same chain of events followed!

These 2 elderly villagers smoked their beedis, had something to chew and would spit out near them, regularly! 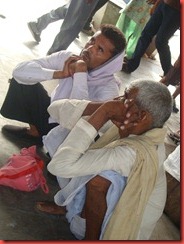 The people around me were from lower/middle class, and where ever I saw, people were so very oblivious to hygiene and cleanliness! Spitting or throwing anything, anywhere seems to be our birth right!  The toilet (the one I passed) was emanating such a stinking smell that it could act as a natural anaesthetic.

While, maintaining personal hygiene and cleanliness is everybody’s responsibility / duty / right… ! And one does not need money to be be clean and hygienic! It’s a basic thing! But, I guess, majority of the people do not subscribe to these views. For them, it’s like germs help build the immune system! May be it does!! Or is it that they just don’t know about the issues / diseases that could crop up because of living in unhygienic conditions!

This station had so many foreign tourists too, I wonder what would be their impression about us and our country! Having a mobile phone is everybody’s necessity now-a-days but hygiene and cleanliness is not!! 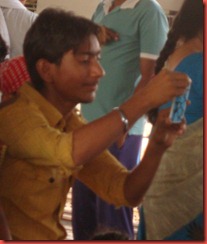