It is the most prized possession among inanimate objects, for the men of our family.

Yes, it is the Remote Control for the Television 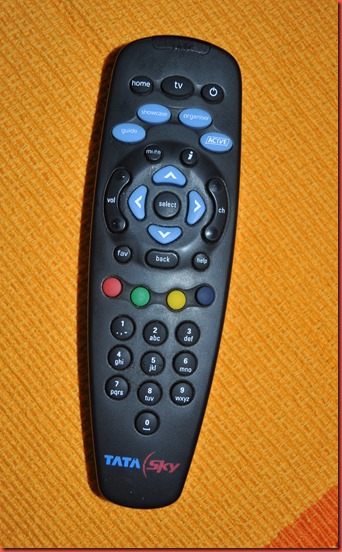 Both the men have some fixation towards this tool. So much so that they’ll not let go of it from their hands even for a second. Many-a-times, they are guilty of carrying it in their pockets to the loo too!

The reason for doing so is that they both have a unique style of watching TV. I don’t know, how the Senior has formed this habit, but the Junior has definitely followed his Dad’s footsteps

They start watching something of interest, say Program 1. As expected, after a few minutes there will be a commercial break, so, immediately they switch to Program 2 on a different channel. There would be an ad break after a while here too, so they may go back to Program 1, but if the ad break is still continuing, they start viewing Program 3 and then go back to Program 2…

Sometimes, they may forget about Program 1 for a while and when the realization dawns they start viewing it again. And by this time, they might have missed some parts of it. But that’s ok with them.
So, at any given point of time, both the guys would be watching 3-4 programs. And this includes movies too!!

I love watching a movie or a program in totality and I love watching advertisements too. So, this kind of multi-program viewing does not go well with the sensibility of my grey cells. I am thus a passive TV viewer at home. I rarely get to hold this remote. And sometimes, when I do, I have to see the remote and then press the button to even increase/decrease the volume.

This post is a part of May Photo A Day.