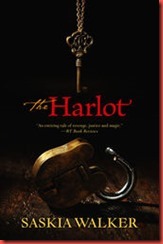 The blurb of the book reads like this… It is a dark era, and a lusty lass will do what she must to survive. Even if it means bartering flesh for a palmful of coins…

Forced to watch her mother burn at the stake as a witch, Jessie Taskill was separated from her siblings in the aftermath. Jessie is similarly gifted, ripe with a powerful magic that must stay hidden. When she’s accused by a rival of witchcraft, Jessie finds herself behind prison walls, awaiting certain death with a roguish priest unlike any man of the cloth she has known.

In reality, Gregor Ramsay is as far from holy as the devil himself, but his promise of freedom in return for her services may be her salvation. Locked into a dubious agreement, Jessie resents his plan to have her seduce and ruin his lifelong enemy. Especially when Gregor’s lust for her is so compelling. She may agree to be his pawn…even as she plots to use him just as he is using her.

The magic part was a bit lame. I think the book would had been just great without it too.