The Secrets of the Dark 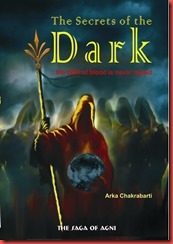 The blurb of the book reads like this… Is one born with his destiny or does he forge it?

In the mystical land of Gaya, two prophecies bind the fate of men and empires alike. The Destroyer born from the royal seed on the Land of the Setting Sun shall bring the empires down, or so has been foretold.
In between the Destroyer and the world stand the Seven Guardians of Gaya, guarding the realm of man. A king, a father, defies the Seven and fate itself to save the last drop of his blood and prince Agni grows in the Land of the Rising Sun, exiled from his own people, unaware of his past.

Losing the woman he loved most to the shadows in the dark, Agni is thrown into a whirlpool of events that he neither knows, nor understands. His quest for vengeance brings him to the doorstep of a secret that will shatter the very foundation of beliefs of a world.

Can Agni avert his destiny? Can he uncover the truth about the Seven and the prophecies, now hidden behind a veil of ignorance?

The secrets of the dark are sometimes so terrible that they are better left unsaid.

The Secret of the Dark is author’s debut novel and at no point it looks like one. This being a historical fiction, Arka has done a lot of research to share the various facts, concepts, mythological characters and all about the period they lived in, which is truly fascinating. The style of writing is very vivid such that the entire scene comes live in front of you and this speaks a lot about the writing skill of the author. This is not the genre that I read regularly, still I was hooked to this book right from the very beginning. The credit for this goes to the author and his remarkable story telling abilities

The detailed map of Gaya in the beginning and the details of the fictional land of Gaya and the list of characters in the end is good.

A minor aberration… the author’s bio is shared in third person while connecting with him on Facebook or by email is written in first person.

Overall, the Secret of the Dark makes for a very engaging and an engrossing read. Go for it for the book will keep you entertained as well as keep you on the edge of your seat.