Only Wheat Not White

Title: Only Wheat Not White 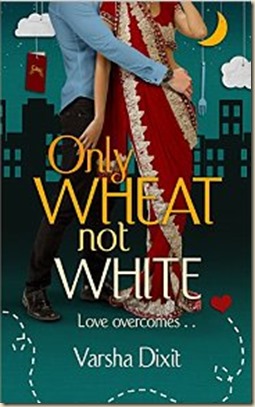 Twenty-six-year-old Eila Sood moves to America to mend fences with her estranged older sister, Sheela. Eila and the rest of the family in India had cut off ties with Sheela after she married Steve Jacobs, ‘out of caste, and out of color’. Elia soon realizes that Sheela’s marriage is on the rocks. To help pay Sheela’s household bills, Eila takes a second job at an afternoon strip club. When she crosses paths with the owner, the handsome Brett Wright or ‘blue-eyed ogre’ as Elia calls him, he both infuriates and fascinates her. Brett turns out to be her reluctant and unquestionably sarcastic knight in shining armor.

As Eila and Brett spend more time together their desire for each other builds. However, when Brett discovers the true reason for Eila’s refusal he storms out of her life, accusing her of being a prejudiced coward. Will Eila find the courage to break stereotypes and embrace her love?

As I read, Only Wheat Not White,  I remembered the locker room scene from Bend It Like Beckham.

I think that pretty much sums it up for a lot of Indian parents. One may think that education, values, personality and all good characters and traits must matter when you are thinking of marrying someone. It’s a bit different for some Indian parents. For them, it’s the colour of the skin that matters. And it is this premise that makes  the backdrop of the story of  Only Wheat Not White.

Eila arrives in New York to renew the ties with her sister Sheela who has married a ‘White’ American, Steve Jacobs. As she gets to know the American way of life, she finds herself bumping into the ‘blue eyed ogre’ – Brett Wright. Though they rub each other off at every chance meeting, they find themselves attracted to each other. As Eila’s mother’s warning ‘Only Wheat Not White’ rings in her head, she finds herself cementing the relationships between Sheela and Steve & Megan and Murli. Will she be able to follow her sister’s footsteps and marry an American? Well, you need to read the book to find that out.

I enjoyed reading Varsha’s book. It has a liberal dose of humor and wit and has a story that flows effortlessly. The twists and turns, surprises and shocks keeps you glued to the story as you turn pages after pages to see where it was going. I liked Eila’s character for her sharp and subtle wit and her good Samaritan attitude, of course, at times, I wanted to shake her when she played martyr in her relationships. Brett and Elila’s maddening but intense relationship made my heart flutter too.

The detailed description of food, places, decorations and renovations of a club are insightful and interesting. The dynamics of relationship between the two sisters and that between Eila and Steve are realistic and outlined beautifully. And the cover is absolutely gorgeous!

Now the things that could have been included in the story. Since, the story is about the parents being unhappy (so much so that they sever all ties) about their daughter marrying a ‘White’, I wish they had a role that was a bit more pronounced than the current non-existent one in the story. Also, throwing some more light on relationship troubles between Sheela and Steve. The announcement of their divorce and the acceptance of it by the sisters seemed a bit unreal.