HomeThe Moment of Truth…and Later??
A to Z of Fashion for Men!! Flavors of Comments

The Moment of Truth…and Later??

Was surfing the channels on TV late night (yeah, I got to touch and feel the accomplice of the Idiot Box last night, coz KG is out on a tour!!) and somehow I got stuck on Star Plus’s Sacch Ka Saamna.

Had heard a lot about the program, but had never seen it. 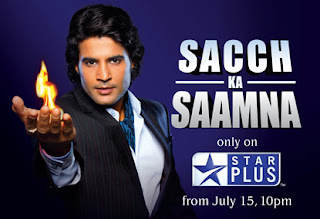 So last night, on Sacch Ka Saamna, a middle aged woman was answering some extremely personal questions like…
“Have you ever beaten up your husband?”
“Have you gone on vacations without your husband’s knowledge?”
“Have you had any extra-marital relationship?”….

And she gave the answers to all the 3 questions in a “Yes”! And it was in the presence of her husband and a 20-something daughter and 2 more relatives!!

The husband’s reaction to the first question… “If, I am wrong, yes, she can beat me!!”

Second question…He was visibly angry as he was not aware till then that she had gone on a vacation without him knowing about it and simply lost his cool and said something to the effect that she is not a child and she can go anywhere, with anybody, at any time!!

And the response to the third question will be aired tonight!!

I was too disturbed and stunned with the whole thing and did moved on to the next channel, but came back to actually see the trauma, shame, embarrassment and humiliation of the contestant and the family.

Most of the people have some big or small skeletons in their closets, but does that mean, for some money (it’s big money for some, though!) and fame (??), one should be washing their (embarrassing) linen in public. And is it worth destroying your relationships for this money and fame??

If, one is sharing those secrets which were of positive nature, the relationships within the family would have strengthened. But sharing their secrets related to lust, betrayals, misdeeds and evil thoughts in complete public view….????

I wonder, what makes them do this?? Is it that they strongly believe in “Truth is mighty and will prevail”?

And if they strongly believed in this, then why do it now in front of millions??

This truth is surely going to shatter their personal lives! I mean, how many would be chivalrous or strong enough to accept such harsh truths??

I know, for sure, that the their relationships would never be the same again!!

Sach Ka Saamna is a show on Star Plus which is the Indian version of the popular American reality game show The Moment of Truth, that makes a contestant answers the questions in front of their family and friends, questions that are extremely personal and embarrassing; if they are revealed in-front of everyone.