HomePERSONALMusingsHail Winters!
And The Child Is Back… Friday’s 55 Fiction : The Mundane Struggles

They say, don’t knock the weather. If it didn’t change once in a while, nine out of ten people couldn’t start a conversation!

It seems every year, I keep hearing, “This year the winters are more severe than the last year!!” Or “Never before were the winters so harsh!”

Ah, whether it’s harsh or severe, mild or very cold winters are meant to be braved and enjoyed!

A quick “Can you answer in one-word (or sentence, yeah some of us love to talk) survey” on “What keeps you going in the winters?”, with the people in my neighbourhood revealed some diverse and interesting responses.

For the Uncle, with a wonderful smile, its loads of warm woollen layers.

While ‘it’s only Pashmeena or Toosh’ for the ladies in my building. Ok, let me clarify, this information I got from the last get-together we had in our building complex.

A friend’s daughter’s friend who stays in a hostel, yearns for piping hot, tasty and delicious home-made food, especially the gajar ka halwa and sarson ka saag and makki ki roti. And her friend loves the moongfali, revari and gajjaks which are synonymous with winters.

And the grandparents on the 8th floor look forward to sitting out in the balcony or garden to soak in all the warmth provided by the Sun God.

While the lady in pink wants to just snuggle up cosily in a blanket with a nice book and a hot cup of masala chai. Wow, I’d love that too!

As for mothers like me, it means some more entertainment management for the kids. While Aaryan is having his winter vacations, his building friends are busy with schools and exams. So, his friends come out to play only in the evenings. For rest of the day, Aaryan has to be kept busy. TV dominates and keeps him engrossed for long, PlayStation games, games on laptop and books holds his interest for a short while. When I banned my child from watching Cartoon Network and its brethren for some time (I feel he should watch something sensible rather than Doremon and Nobita’s gadget stories) and focus on something creative. Inspired by what he saw on Animal Planet channel, this is what he made yesterday. 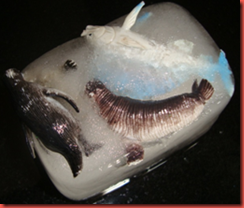 These are the Walrus, Penguin, Seal and the Shark toys enjoying themselves in Antarctica. By the way, this Antarctica was created in our refrigerator.

And as for the watchmen, it’s the warmth of the fire in the cold of the night that keeps them going. 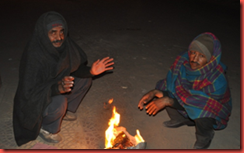 What keeps you going in this cold season??