Jaipur Literature Festival, the most prestigious literary fest of Asia-Pacific for all the book-lovers kicked off yesterday at Diggi Palace, Jaipur.

Like last year, this year too, I went to this much talked about fest with my bogging friend Kadambari. We decided to go for HH Dalai Lama’s session. As we were getting ourselves registered and getting the security check done, HH Dalai Lama’s convoy arrived at the venue. He was sitting on the front seat of a SUV and was greeting the Tibetans who were standing on the other side of the road to catch a glimpse (or seek blessings) of their spiritual leader.

On time, we reached the Front Lawns, and what a sight it was. It was jam packed, there was not even an iota of space to move. Of course all around us were not literature loving people, there must be many who would have come to just see the celebrities! But what a disciplined audience it was! Even before His Highness could come on the stage, there was pin drop silence.

The spiritual leader was in conversation with Pico Iyer on Kinships of Faiths : Finding the Middle Way. His talk was interesting and enlightening. It was interesting to note that HH Dalai Lama as a young Buddhist, when he was about 7 years old, was not interested in his studies, but the fear of his teacher forced him to learn. And now, in his 77th year, he still considers himself a student of Nalanda University. He talked about secularism, similarities between science and philosophies of Buddha. I expected HH Dalai Lama to be a great orator but that was not the case.

The next session was a tribute to Sunil Gangopadhyay by Sharmila Tagore. Sharmila Tagore looked very graceful and was extremely well-read on Sunil Da’s work. She read some excerpts from his famous novel ‘Sei Samoy” 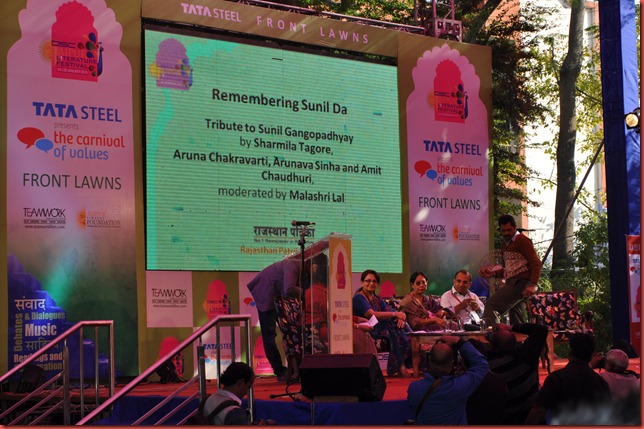 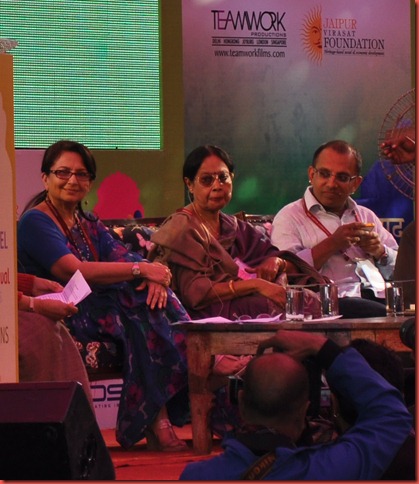 Saw Shashi Tharoor in conversation with Tarun Tejpal too. During the break between sessions we saw yesteryear actor, Vijayendra Ghatge. There were so many familiar faces too. That was day one at JLF.