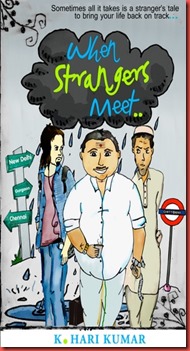 Author : K Hari Kumar
Publisher : Srishti Publishers & Distributors
ISBN : 978-93-80349-93-0
Number of Pages : 206
Price [INR] : 100
Genre: FictionFrom the blurb of the book… What happens when Jai is stranded at the metro station with an irritating stranger called Iyer & a mysterious Pathan? How will the tale from Iyer’s past affect Jai’s future? And why does the mysterious Pathan keep staring at Jai? What happens inside that small room of the metro station? Nobody believes Jai when he claims that He was there!. People think he is crazy, but is he?The story revolves around Pathan, Jai & Iyer, and their tryst with each other’s destiny. A light-hearted drama with a heavy tint of suspense that captures father-son relationships from the viewpoints of three different strata of society. Action,Comedy, Romance, Drama, Suspense…
A typical Bollywood fiction…

A touching tale about choosing between the paths of our dreams and their expectations.

Review : I started reading this book last night and finished it today. Speaks a lot about the book. The questions on the cover, intrigued me to read this book and find the answers.

When Strangers Meet is a nice, simple, heart warming story with a refreshing approach. It explores the dynamics of father-son relationship. The three characters Jai, Iyer and Pathan are from different backgrounds, social strata and age groups. They meet by chance at the rest room of a metro station and life changes for all of them. The maximum focus is on Iyer’s story which is that part of the book that I liked the most. His story is narrated well and is pretty riveting and interesting. Pathan’s character and his story was least talked about. In fact the book would had been just fine without him too,

Jai is portrayed as a unruly and troubled teenager who abhors Mathematics and wants to pursue animation while his father who is a Mathematics Professor, wants him to be an Engineer. Because of this the father-son share love/hate relationship. The hurling of the abuses by the father and the son saying ‘shut-up’ to his father is not easy to digest and leaves a bad taste.

The book lacks editing. There are a lot of painfully obvious spelling and grammar mistakes. In fact at places, the dialogues are forced and sound artificial.

The climax takes you by surprise and leaves with that happy feeling.

For some quick interesting and gripping reading (you may have to ignore the poor editing though), go for When Strangers Meet…