As kids, Monopoly was our favourite game to be played during the afternoons of summer vacations. 5-6 of us would gather at a common place and spend the entire afternoon, counting money, paying taxes, buying and selling assets, mortgaging properties and even going to the jail.

Our first Monopoly set had paper money. Since, it used to fly all around because of the fan above or get torn due to repeated usage, we used to cut the card-board covers of our school copies (they were redundant then, since after vacations we moved to the new class). On these cut card-boards we used to paste our Monopoly paper money. And guess, what we used as glue… it was a liquid mixture of wheat flour and water. It was so much fun.

Next season, our parents got us a new Monopoly set which had plastic coins as money. This lasted us for a lot many years.

This is Aaryan’s Monopoly set which he enjoys a lot with his friends. Whenever they have any query or doubt, they come to me. I am their referee. I tell them to read the rule book, but they love to argue with each other more than focus on the fine print.

A board game like Monopoly teaches some valuable lessons, such as 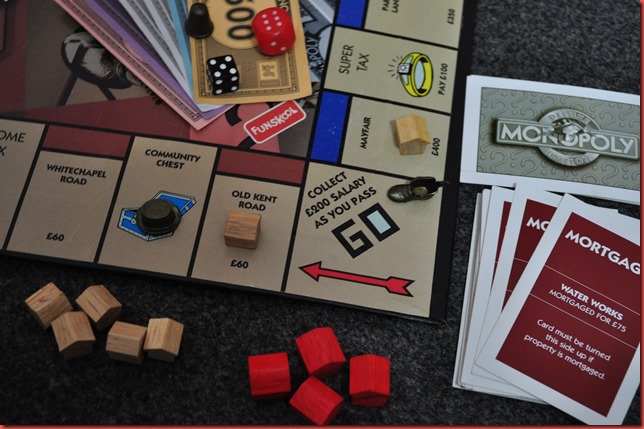 This post is a part of May Photo A Day.