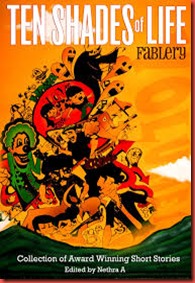 Fablery is a platform for aspiring writers to get published and reach out to the bigger audience. Fablery organised a contest last year and ten award winning short stories from the ten different genres have been presented in Ten Shades of Life. From a nail-biting thriller to a ghost story, a romance to an ingenious fantasy, an adventurous science-fiction to remarkable experiences of salaried men, stories of heroes and philosophies of life – it attends to the preferences of all readers.

It was a delight to see the stories of some familiar bloggers.

My favorite story from this collection is Roshan Radhakrishnan’s Action/Adventure Harry’s Bluff. It is fast paced story of a hired assassin who becomes the victim himself. This story surely keeps you on the edge of the seat. The characterization is good and the best was the way the story unfolds – truly international.

I liked Karthik’s , A Nootropic Egress which is Science-Fiction. Crisply and skilfully narrated, this is a very imaginative story of a whiz-kid who communicates with the aliens. I liked the names of the aliens in this story. The story is high on creativity and keeps you engrossed till the very end.

Deepa Duraisamy’s Suspense Thriller, Where Did You Go? has all the ingredients requisite for this genre. A story of a child being kidnapped from a temple and the how the police goes about with the investigation, this is a story with a novel plot.  Also it is contemporary and compels you to keep turning page after page. I felt the ending was a bit abrupt, though. I wish it didn’t end too soon or so suddenly.

Reshmy Pillai’s The Secret of Ahiraah makes for a riveting read. It is a historical story set in the 16th century India during the times of Rajput kings. The details of the life and people of that era, the guarded secret and the secret passageways in the temple and fort, spies and mysterious happenings are fascinating and engrossing.

The Incarnadines is a Fantasy/Mythology from Miss Cheyenne Mitchell. The concept of the Incarnadines is something new and it was intriguing to read about their beliefs and rituals. The storyline is promising but could have been better.

A Good Day to Die by Rahul Biswas is very interesting and impressive ‘Occupational’ story. It is about the lives of firemen, hence the genre is called occupational. The twist in the end makes you sit up and gives you a delightful reading experience.

Barren Harvest by Vinaya Swapnil Bhagat is categorised as Philosophical. I could not understand the rationale of classifying it in this genre though. It is a sci-fi fiction which is set in future after the apocalypse, when humanoids rule over and control the humans. The story line is intriguing as you ponder about the future of the human race in the times to come.

Something Like That by Shankar Raman A falls in the Humor category. It is a story line set in a bank office. The story has a few humorous moments but does not come up to the expectations one has from a humorous story.

Red and Gold, a Romance by Monica Pant is set in the 18th century Awadh. The story line is predictable with the two love birds are from different religions… This story did not impress me much.

Weekend in The Country by Bruce Memblatt is a Horror story. This is a dull story of 2 friends who go camping and see some bones and ghosts. The creepiness or the jitters that one gets on reading a horror story are grossly missing.

Overall, Ten Shades of Life, with its ten different stories made for a very entertaining and interesting read.