HomeBOOKSBook ReviewShoes of the Dead
Why I Write… Beautiful Eyes

Shoes of the Dead

Title : Shoes of the Dead 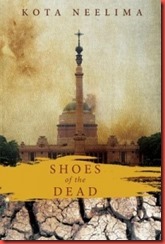 Crushed by successive crop failures and the burden of debt, Sudhakar Bhadra kills himself. The powerful district committee of Mityala routinely dismisses the suicide and refuses compensation to his widow. Gangiri, his brother, makes it his life’s mission to bring justice to the dead by influencing the committee to validate similar farmer suicides.

Keyur Kashinath of the Democratic Party – first-time member of Parliament from Mityala, and son of Vaishnav Kashinath, the party’s general secretary – is the heir to his father’s power in Delhi politics. He faces his first crisis every suicide in his constituency certified by the committee as debt-related is a blot on the party’s image, and his competence. The brilliant farmer battles his inheritance of despair, the arrogant politician fights for the power he has received as legacy. Their two worlds collide in a conflict that pushes both to the limits of morality from where there is no turning back. At stake is the truth about ‘inherited’ democratic power. And at the end, there can only be one winner. Passionate and startlingly insightful, Shoes of the Dead is a chilling parable of modern-day India.

The stories of the farmers committing suicide in Maharashtra due to failed crops and debts keep making headlines in the newspapers. Apart from some names and statistics one is never privy of what compelled the farmer to take such a drastic step of ending his life. Shoes of the Dead, is an insightful story about the life of a farmer who is hit by poor rains, failed crops, the unpaid debts,the mortgaging of every asset in hope of a better crop, the daily harassment and the humiliation from the moneylenders, his exploitation… his truth.

Shoes of the Dead, also brings to light the appalling nexus between the political leaders in Delhi and the district suicide committee. For the sake of the vote banks and the power of the power, denying compensation to the widows is beneficial for the political system. The book showcases the power of the pen and the ethics of journalism that can bring about a big change.

Though the subject of this book is a serious one and raises some very unpleasant questions about the unfair practices prevalent in our country, Shoes of the Dead is an interesting and a pleasant read.

With simple language and crisp narration, Shoes of the Dead is the truth behind the news headlines that shock and perturb us regularly.

This review is a part of the biggest Book Review Program  for Indian Bloggers. Participate now to get free books!