HomeLIFESTYLELiving BetterStigma : A Barrier to Suicide Prevention
Sharing the Joy of Reading Savor The Moment

Whenever I read or hear about a suicide, two immediate thoughts flash in my mind:

While there would be many who would kill themselves on an impulse but most would be thinking and mulling over it for a long time. 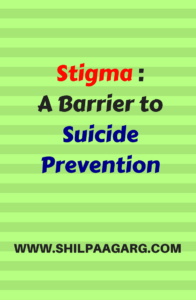 Often, but not always, a person may show certain symptoms or behaviors before a suicide attempt, including:

These are the warning signs which are hard to miss but are generally ignored. Why?

They say that suicide and suicidal behaviors usually occur in people with one or more of the following:

Just as a blockage in artery can lead to a heart disease or an overgrowth of cells can cause a tumour or breakdown of the stomach lining can cause acidity or ulcer, similarly an imbalance in brain or its chemicals could lead to mental illnesses. While we waste no time to see a medical practitioner for any body ailment why do we hesitate to seek medical help when we suffer from psychological pain?

A significant number of those with mental illnesses who commit suicide do not seek medical or professional health.

Many people believe that if a person is going to kill themselves, there’s nothing one can do. If you try to stop them, they’ll just bide their time and do it later. However, data shows that suicidal intention is transient. If one can get support and medical assistance to get through the trying times, we can help prevent an untimely death and help  someone to smile and live life once again.

World Suicide Prevention Day is an ideal time to inspire people to work towards the goal of developing creative new methods for eradicating stigma. And the first step towards is by creating awareness… let’s spread the word and do our bit in saving lives around us.

We are blogging for this cause at Write Tribe. Do read and spread the awareness about this initiative.

Did It Happen? I Hope NOT… NEVER

It was just another regular day. She had gone to a Watch shop to...