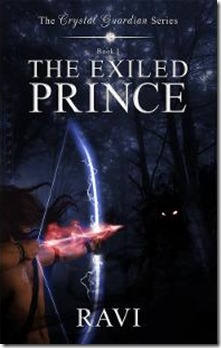 Legend has it that there exists a supreme Crystal of Creation, with part of the souls of Lord Shiva and Narayana suspended within it. This single most powerful weapon, with the power to construct, annihilate, and recreate the universe, remained hidden somewhere deep within the Himalayan ranges for millennia . . . until now.

Rama, the hero of the ages, must embark upon a perilous journey to find the Crystal of Creation before someone else, someone with an insatiable lust for power, discovers it and the reign of the entire cosmos falls into his hands.

And thus begins an epic adventure that will take Rama beyond the kingdom of Ayodhya into lands where he will have to battle the fiercest of demons that have colonized the earth, and, in the course, change the destiny of human lives forever. This tale will also seek to answer a question that has never been asked: Who was Rama really? What was his real purpose? Is he the real immortal?

As powers greater than the universe itself come together only to erupt into chaos and intrigue, discover a tale set in a time before Time, where the immortal Rama will come to life and reveal his mysterious world through his eyes as he begins his true purpose-the quest for the Crystal of Creation.

When I held this book in my hand, as I was leafing through the book, I came across a bookmark in the book which said, “A uniquely different telling of the Ramayana, narrated from a stunning new point of view – Rama’s own.” The first thought that came to my mind was what could be new or different in Ramayana. Yes, we have grown up reading and watching the Ramayana stories. Then I read, the blurb of the book and I was intrigued.

As I started reading the book, the range of emotions varied between amazement, curiosity, incredulousness, awe, wonder, stunned surprise….

The Exiled Prince is an interesting tale that blends magical, mythical adventures into the Legend of Ramayana and all this is narrated by Rama himself. Central to the story is the Crystal of Creation that has to be guarded to prevent it from going into some wrongful hands.

Rama narrates the stories from his father’s past, regarding his adventures as a warrior, killing of Shravan and his parents when he allowed his arrogance and pride to cloud his judgement, the king’s marriage to Queen Kaushalya and the assassination attempt by Mukhar and effect of this on his health and subsequent marriage to Kaikeyi. The story of how Rama and his brothers were born kind of amazed me. This was something that I had never read or heard about it earlier.

Rama and Lakshman have been introduced as young boys with no realization of their purpose on this earth. The sages and the Gurus with their immense wisdom and knowledge help them to attain enlightenment. The cosmic forms of energy play their roles in their enlightenment and strengthens them with supernatural and divine powers. They were told that everything in life happens for a purpose and that what happens today is connected to what awaits in the future tomorrow and that Rama was engineered to be a war machine!!

The book showcases Rama’s wars with various demons and subsequently his marriage to Sita and his exile. The Crystal of Creation is not found in this book and should be revealed in the sequel.

I liked this very refreshing take on the Ramayana. The author has done extensive research for this book to bring about some unusual, unknown (at least to me), surprising aspects of the legend of Ramayana.

The narrative is fast paced and flows smoothly and compels you as a reader to keep turning the pages. The imagery created with words is vivid which enhances the reading pleasure. Except for the war scenes which in my opinion were too descriptive and lengthy, rest of the story reads like a breeze.

With The Exiled Prince, the author has piqued my interest about the The Crystal of Creation and am looking forward to the sequel where more mysteries along with a refreshingly different take on the legend of Ramayana is unraveled.