The little chat that Cyrus had with the sub-inspector Duryodhan Desle in cell number 308 disturbed him. He had to get out of this police custody immediately. He requested Duryodhan to allow him to make a phone call.

As Cyrus made that one call, Duryodhan looked up and sniggered in his direction, before grabbing his paan from the drawer and made an attempt to look busy with some papers.

JJ tapped her fingers on the table top, a habit she had when she was feeling restless, and glanced at her phone for the hundredth time hoping the clock would tick faster. But the time was moving at its annoying pace and the clock showed 3:30 in the afternoon . There was still no sign of the delivery boy.

Patience. Patience. She repeated. But then, while patience with hard work can move mountains, patience in idleness that she was convincing herself of, a few seconds ago, moves nothing, not even cobwebs. She took a deep breath in and opened her laptop to do something constructive.

The start-up page on the Google Chrome opened with her Facebook wall. As she checked her timeline, a smiling picture of Cyrus greeted her. Her heart did a complete somersault. She gave a wistful look at his picture hoping that he would join her soon. On an impulse, she clicked on his picture and saw his timeline. As she scrolled further down, she came across a link. http://cdslegalden.blogspot.in She opened the link and it led to a blog. Cyrus’s blog. An appreciative whistle escaped her lips. 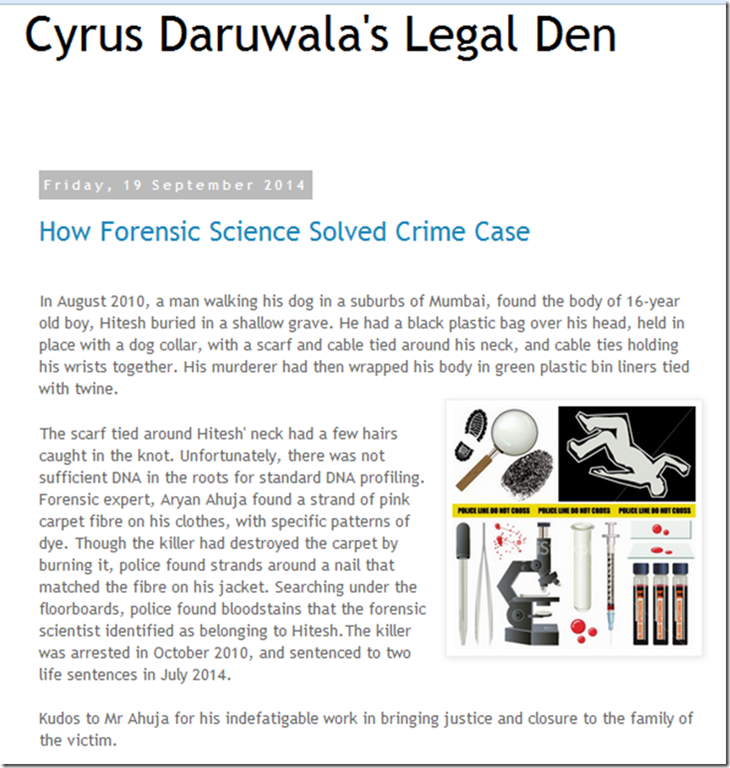 “Ok, so he has a blog! And writes about legal investigation cases “, she mused. Before, she could explore further, the delivery boy interrupted her, “Madam, your papers!”.

“At last!”, she muttered, before dismissing him with a curt nod of her head.

Immediately, she packed her laptop and the papers and rushed out.

Duryodhan leered at her with a sick smile as he found that all the bail papers were in order. He shouted at the constable to bring Cyrus out from his cell.

JJ and Cyrus exchanged a look which was not lost on Duryodhan.

JJ and Cyrus drank their coffee in companionable silence, until Cyrus finally broke the quiet. After all that she had done for him, he believed that it was time for him to come clean and tell her the truth. He cleared his throat and looked at her feeling all bashful and guilty.

“Actually, I have not been honest with you”, he stuttered.

It took her a moment to absorb it but she eventually lifted her right brow and looked back at him.

“I have been to the crime scene and have collected 3 pieces of evidence. I have a chocolate wrapper, a blank piece of paper and a thorn from the crime scene and Duryodhan knows about it. My instincts tell me, that these will lead us to crucial discoveries about the gruesome murder of lil’ Sophia.”, he explained.

“I have been thinking about these, since the past 3 days in that wretched cell but nothing is making any sense. I think we must consult the expert from Mumbai. His name is Aryan…”

“…Ahuja!”, JJ completed for him. He gave her an incredulous smile.

“Aah! So you have been snooping around my blog!”, he looked pleased now.

Finding his address was a cake walk. As they reached his building, JJ stopped dead in her tracks. Cyrus looked at her with his eyebrows raised questioningly. After recovering from the initial shocked surprise, JJ found her voice and said, “This is where Tara stays too!”

He was about a head taller than her and had a clean short crew cut. He had distinct cheekbones and an angular jaw made him look devilishly handsome. He was lost deep in thought as he looked at the dull weather outside. JJ was busy admiring the man in front of her oblivious to the inner turmoil raging inside him. The man had aged right in front of their eyes. His earlier reaction of point blank refusal for taking up the case was a sharp contrast to the pensive looking man when they mentioned Sophia’s name.

Cyrus nudged JJ with his shoulder and gave her a withering look. He cleared his throat and said, “Please, Mr Ahuja, you must help us. If not for anything, at least for Sophia. She must have played in front of you…”

“Oh anything for Tara errr I mean, Sophia…. “, he stuttered and muttered, the overcast weather mirroring his mental state.

“Please, call me Aryan and tell me all that you know about this case”, his demeanour completely changed. He was all business.

Read the next chapter of the story here

Me and my team are participating in ‘Game Of Blogs’ at BlogAdda.com. #CelebrateBlogging with us.