Sleep is very important to a child’s well being, that’s what my mom believed in. I remember, it was mandatory for us, as kids to sleep in the afternoons after coming back home from school and likewise we had a fixed time to sleep at night too. She believed that when we have had a good rest, we were more alert and in a better mood (read less cranky and irritable for her to handle the three of us) and of course it was good for our overall physical and mental development as well. She learnt from experience that a sleep deprived child cries at everything and nothing makes her happy. The child is not able to cope with life around her when she is tired and this in turn makes her and even those around her miserable.

So, a good bed routine is important and crucial because no child will ever come and say, “I am tired and I want to sleep!”

When Aaryan came in our lives, fortunately my mom was with me. Her experience of bringing up three kids coupled with my acquired knowledge from baby books and internet, we teamed together to bring up the apple of our eyes!

When Aaryan was as young as 6 weeks old, we started with our bedtime rituals for him. By that time, I had some experience as a young mom and knew how to handle my child too. 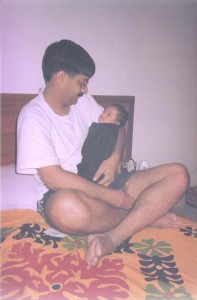 Swaddled Aaryan with his Dad

When he was a toddler, a massage followed by a nice warm bath and feed would put him to sleep for long hours during the day. And in the evenings, after freshening him up and taking care of his food needs, we’d again put him to sleep. Aaryan was born in Mumbai. His Maharashtrian massage maid after giving him his daily bath would tie him up in a cloth so that movement of his limbs were restricted. She said that this process, which internet told me is called Swaddling, settled and soothed the child and helped him to sleep longer with fewer awakenings. This was a boon for us. We practised this till Aaryan was old and strong enough to wriggle out of it on his own and/or would not let us swaddle him at all.

As he grew older, we changed the sleeping schedule but the naps in the afternoon and a fixed sleeping time at night were a constant.

After coming from play school/school, he’d have his lunch and sleep for an hour and a half. A quiet and a dark room helped him to sleep faster. When he was very tired, he’d sleep immediately, if not, indulging him in a chat about his day at school for a few minutes and/or sharing a story would put him to sleep soon.

The evening bedtime routines were a bit elaborate though. It started with a bath /wash after the evening outdoor play followed by dinner and then half an hour of Cartoon Network.

By 8 pm, he would be sent to brush his teeth and change into night wear. He would then pick up a book which he’d want me to read to him. I would then read him stories from a large collection of books that I was buying since he was a toddler. Usually, he’d sleep before one story got over but there were days, which were many actually, when he’d say, ‘one more story’ and that could go on up to 4-6 stories! Sometimes, he’d tell me his version of stories which were very imaginative. I remember once he asked me “Why don’t you sing me a lullaby. Hitesh’s mom sings him one every night”. I was taken aback. I didn’t knew a single lullaby. But then internet came to my rescue once again. I practiced one the whole day and sang one for him later in the evening. My then 4 year old son, sweetly stopped me and asked me to read out a story. That was the first and probably the last lullaby that I ever sang to my child!

I have realized that setting bedtime rituals for a child is very important. It adds to the consistency and predictability in a child’s life which is so very crucial. And also because a good night sleep,  in fact is as important as nutrition.  It helps him to grow well and boost his memory, cognitive skills along with creativity and energy level. Also a well rested child is always a happy child!!

So, what bedtime rituals do you follow with your children?