Lessons from a Crashed Laptop

9th July, 8.10 am… something unimaginable happened. My tech soul mate aka my Laptop died on me. That I was devastated,  was an understatement. I tried various plug points in the house to charge, re-inserted the battery, pressed the power button mercilessly, but the laptop refused to come to life.

I didn’t give myself the time to mourn, but simply galvanised into action. I made Sunita, my house help to rush through the chores and reached the dealer showroom where I had met-fallen in love-and finally married my tech soul mate. I thought, it must be the problem with the adapter power cable. So, I just had to buy the new one and believed that I would be re-united with my darling in a few minutes. But the service support detected problem with my laptop. Gasp!! Shock turned into momentary coma. While that guy was coolly replacing the new laptop cord in its box, I was impatiently waiting for him to revive my laptop. Finally, when he got my attention, I told him that I’d wait in the showroom, while he worked on my laptop. He smiled at me (I am sure, he must be wanting to laugh hysterically, though) and said, “Ma’am, this will take a day!” I couldn’t believe my ears. My world came crashing! I tried to cajole him to work on it faster, but he was firm.

Dejected and depressed, I called my real-life soul mate aka KG, who was out of town and in midst of some meeting. I shared the tragic and heart-breaking news with him. As I was going on and on about how such a thing could happen and how grief-stricken I was. KG suggested that I call our friend J and ask him to send his kids’ laptop to me. I called J immediately but his number was busy. While I was fidgeting with my phone and giving time to J to finish his call, he called me. Before I could say anything, he said that he is arranging to send the laptop. It took a few seconds for the brain to comprehend his words. As I was gushing with gratitude, I smiled at what KG had done. He knew that without my laptop, I’d be like a fish without water, so he called J himself and made it easier for me.

Soon enough, I had a laptop in my hands. I consoled myself and wished and hoped and prayed that I am united with my own laptop soon and started the laptop J sent me. I inserted my internet data card and it refused to work. I applied all my tech know-how to get the internet working on this laptop but to no avail. I called the customer care and spent an hour on phone with the various executives but the result were the same.  Finally, a tech support was assigned to visit home by evening and sort the issue. I thought, till he comes, let me check my Facebook, blog or surf in general on my phone. And guess what, the Murphy’s Law came true for me. Yes, everything does goes wrong all at once! The internet on phone was terribly slow and even Whatsapp messages were not getting delivered.

By this time, I was heartsick, fed-up and frustrated. I decided to snap out of this state and got ready to visit my Mom and Dad. They were thrilled to see me and the Kadhi-Chawal that Mom had made for lunch instantly made me feel better. There’s nothing like mom’s cooking to comfort and cheer you up. Rest of the afternoon was spent in chatting and relaxing with them.

In the evening, the tech support guy sorted the internet problem and I thought that the bad day was behind me.

I started writing a post for the blog and the laptop shut down on its own suddenly. It was a WTH moment! I looked at the laptop incredulously. This was the second laptop in a day that had died on me. Unlike my laptop, J’s laptop did wake up from slumber, but it continued to behave erratically. So, though, I had a laptop and a working internet, but I couldn’t do anything, not even lurk on the Facebook.

I just gave up on my tech world and entered the calm and often ignored space aka the kitchen. Next day was the birthday of our friend’s daughter and I thought of baking a cake for her.

I actually prayed before gathering the cake ingredients, that nothing should go wrong now, given the bad day that I had had since morning.

And… nothing went wrong!

I  graduated from making the regular tea time cakes to an innovative cake, that day. Yes, I made this gravity defying cake. Isn’t it cool! 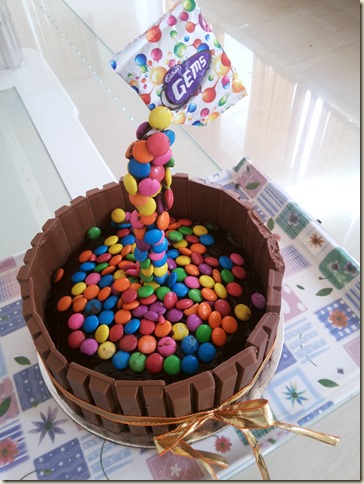 The Gems are  a little less in this picture, but I bought more and added to the cake later which gave it a well full of Gems look. The birthday girl loved her gift and all the others at the party were in awe of it too.

So, for a day and half, I was forced to refrain from using laptop and internet. I realized how dependent and addicted I am to my gadgets and that I share a very unhealthy relationship with technology. How miserable I was when my laptop crashed. How weird it was that if the internet was not working, I didn’t know what to do with the laptop. Without my phone, I’d be restless. Though I wouldn’t be expecting those earth shattering or momentous emails or messages on phone, but every message notification makes be go and grab my phone.

This day and a half made me realize that though gadgets have become an integral part of our lives, but there’s more to life than Facebook, RTs on Twitter or blog or silly messages on Whatsapp. It is important to take a break from the technology especially social media which takes away most of my time. It is important to enjoy and savor life outside the tech world. I have heard and seen a few blogging friends do the digital detox. And I think, I need it too. I think, I need to find the balance in appreciating and using technology the right way, but still knowing when to turn it off to experience life to its fullest.

I know, a digital detox would not be easy initially but I know that it would be rewarding for both me and my life.