After having woken up at an unearthly hour to catch the first flight of the day, I am now sitting in the airport lounge. With the breakfast done and out of the way, I am awaiting the departure of my second flight which is a few hours away. And I am doing what I love doing the most. Yes, observing the buzz of life around me.

Actually, it all started as soon as I made myself comfortable in my assigned seat in the aircraft. 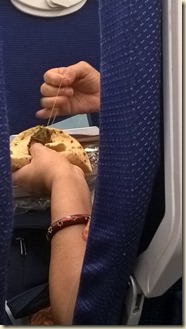 I was looking out of the window and drinking in the beauty of the early morning when a strong aroma hit me. I looked around and saw a passenger in front of my seat opening her lunch box.

The lady was eating stuffed karela (bitter gourd) with parantha. The stuffing inside was secured with a thread, just as my mom does it and this made me smile and crave for food made by mom. Seeing her having breakfast at 6 am and that too before the flight taking off got me thinking. I think she must be a 6 am breakfast lover or must be believing in eating early in order to keep insulin and blood sugar levels regulated while kick-starting the metabolism. Wonder what would be her actual reason to do so though!

A couple with a 2 year old kid are sitting next to me in the lounge.  As I was chatting with the parents, I observed the kid’s hand. He was wearing a gold ring. I saw a kid wearing a gold ring with his name engraved on it for the first time. I mean, have seen kids made to wear gold chains, bangles, earrings from a young age. But seeing a kid with a ring was a first for me.

Saw the promotion of Rajinikath starrer Kabali on the Air Asia aircraft.  Air Asia is the official airline partner of one of the most awaited movies of the year, Kabali, and several of its planes will also feature in the film. It seems that in Kabali , Rajinikanth plays the role of a Malaysia-based don, and this seemed like a right brand boosting strategy for the Malaysian carrier, Air Asia to partner with this movie. Interesting! 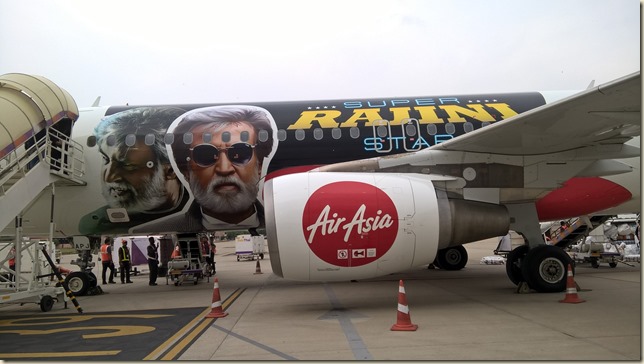 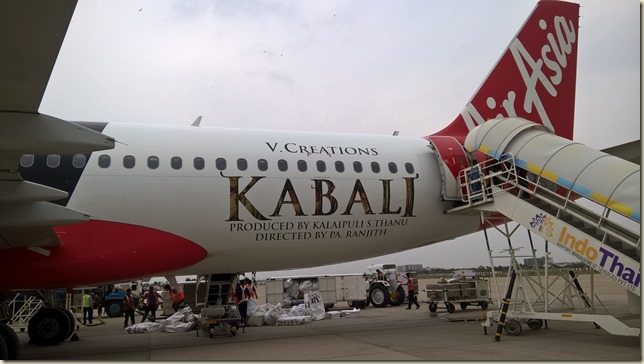 Last week, during my travel by the Jaipur-Delhi Double Decker train, I came across yet another interesting sight. The cracked glass window of the train had this sticker… 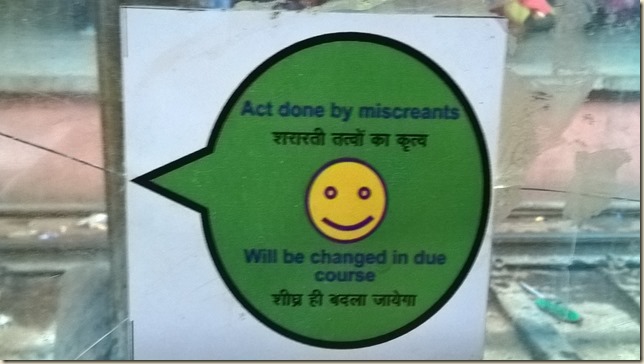 I saw such a sticker for the first time, though I have seen innumerable damaged things in the trains.

This train journey reminds me of the scene I witnessed at the railway station before boarding the train. A family of 4 who were standing next to me were chatting and having a good time together. As soon as the train arrived on the platform, young man of the family began saying good-byes to his parents and sister. And suddenly, their laughter ceased as they saw him leave them. I watched them some more from my window seat in the train. Seeing the mother’s silent tears, made me teary eyed too. It’s always harder to be left behind than to be the one to go…

Hope they all meet soon again and have lots of reasons to smile and laugh again.  And I am thinking of me reaching back home too after five days on the road.

Linking this to Day 3 – Write Tribe Festival of Words #5