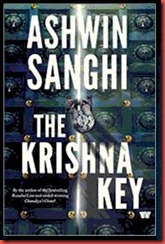 Synopsis : Five thousand years ago, there came to earth a magical being called Krishna, who brought about innumerable miracles for the good of mankind. Humanity despaired of its fate if the Blue God were to die but was reassured that he would return in a fresh avatar when needed in the eventual Dark Age—the Kaliyug.In modern times, a poor little rich boy grows up believing that he is that final avatar. Only, he is a serial killer.
In this heart-stopping tale, the arrival of a murderer who executes his gruesome and brilliantly thought-out schemes in the name of God is the first clue to a sinister conspiracy to expose an ancient secret—Krishna’s priceless legacy to mankind.

Review : I have read Ashwin Sanghi’s second book, The Chanakya’s Chant and had loved it. So, the expectations from this books were high. Similar to The Chanakya’s Chant, The Krishna Key too has 2 stories running in parallel… one is dated five thousand years ago and second one is set in today’s time. The 2 stories blend with each other with great ease. The beginning of each chapter is the story of Krishna, narrated by Krishna himself which is followed by the present day story of Historian Ravi Mohan Saini and his quest to unravel the Krishna Key. His journey in search of Krishna’s most prized possession abounds with a lot of murders and mysteries which are very captivating and engrossing.

A LOT of research has been done by the author to bring out the various facts and concepts and their explanations, using history, mythology, symbology, chemistry, nuclear technology which was very enlightening and  fascinating. For example, I liked the significance of number 7 and 9, the one-eight pattern in the magic square and the mystical importance of the number 108 and Swastika too. Also the similarity of the present day characters of the book, Varshney, Bhojaraj, Kurkude, Saini and Chhedi to the 5 clans of the past who helped Krishna build the magnificent city of Dwarka,  Vrishni, Bhoja, Kukura, Shainya and Chedi was simply amazing. And the anagrams of Sir Khan as KRISHNA and Taarak Vakil as KALKI AVATAR were impressive too. However, there were sections that had TOO much of explanation and details which was a bit too much to handle at times!

Whenever, I was reading the conversation between Ravi Mohan Saini & Priya, and between Mataji & Taarak, it was a sense of deja vu! It was so very similar to The Chanakya’s Chant. The 2 lead characters, Ravi Mohan Saini and Mataji are shown to be very intelligent and possessed vast knowledge and expertise but their protégés Priya and Taarak Vakil respectively would only be asking “Why? or How? or And?”, which would result in Saini and Mataji giving very detailed explanations. Interestingly, at one point Priya mentioned that she is relieved that “I dont have to listen to your boring lectures anymore.” Know what I mean?

Despite being a ‘big fat book’ The Krishna Key is surely a page turner as it is very fast paced. The fascinating plots and mysteries keep you glued till the last puzzle piece is in its place!

This review is a part of the Book Reviews Program at BlogAdda.com. Participate now to get free books!