A Letter to Our Adolescent Generation

Hey Guys!Yesterday, I read about a 17-year-old girl from a South Delhi public school, who was allegedly sexually assaulted by two MNC employees. Her statement to the police reveals a sordid tale of exploitation by the two men who, she alleges, were working in tandem. TOI states that it was a Facebook friendship, that began in September 2011, which pulled her into the quagmire.

And this made me think about this business of befriending strangers on Facebook and other networking sites. I am sure almost all of us have got a few ‘Friend’ requests from strangers on Facebook. Some even send a message along with the request which mostly reads like, “Hey! Your profile picture is very nice or you are beautiful.”

How do we react to such requests from strangers?… Feel flattered? Smile? Feel good that somebody finds us beautiful? Irritated? Angry? Disgusted?

While, it is a no brainer and we may say that nobody would add strangers as their friends on Facebook but then there are people who do just that!

In fact, there are many who boast about having hundreds of ‘Friends’ on Facebook and it becomes a matter of ‘neighbours envy, owner’s pride!’ There is a competition for getting Likes and Comments on pictures and status updates!

I remember, as kids it was drilled into us about not talking to strangers. Are the same rules valid in today’s age when social networking is the new mantra!? 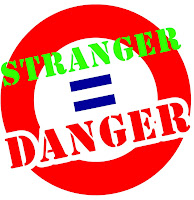 While it is very easy to get carried away by the peer pressure, the popularity contest, of ‘who is having more friends’ or ‘who got more likes and comments’, it is important to know the perils of befriending strangers…

“If I don’t know you, you are not my friend on social networking sites”, follow this religiously. Cancel the request or simply block the person.

Experience the experiences, soak them in, learn from them rather than just clicking to share on the networking sites.

Communicate with your real life friends, your parents, your siblings, grandparents…

Believe it, stranger things are happening. It is better to be cautious.

Hope you’ll be true to yourself and go with your instincts. Don’t be somebody you’re not just to fit in. Also remember that we all learn from our experiences, but we can learn a lot from the experiences of others too.

Stay Safe and Grow Up
Your Well-Wisher