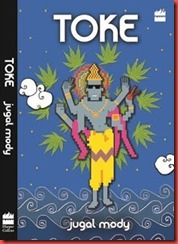 Author : Jugal Mody
Publisher : Harper Collins
ISBN : 978-93-5029-340-9
Number of Pages : 216
Price [INR] : 160
Genre: FictionFrom the blurb of the book : So Lord Vishnu showed up one morning when I was really stoned and asked me to save the world from turning undead. How did I save the world? I didn’t  We did. And while saving the world, I got to forcefully kiss the girl of my dreams. Many times. My best friends got to smoke a lot of good shit. A lot more than they would have otherwise smoked in that much time. They also got to crash an airplane outside Santacruz airport and kill a lot of poor people. But don’t worry, they were not people when they died. We were joined on our quest by two Japanese girls who can kill people with their pinkies, one of whom forcefully kissed Danny. Yes, there was a lot of non-consensual kissing in this adventure. With tongue.

Hi. I’m Nikhil. This is my story. And I swear I have a t-shirt to prove it. Toke is the story of Nikhil, a lazy IT professional who is stuck in a boring job, has a boss who harasses him, and a colleague who loves to add misery in his already miserable life. His parents, like any Indian parent are disappointed with him. One day, when things at work goes from bad to worse, he finds solace in the company of 2 friends Danny and Aman  who smoke pot, order pizzas every day, watch movies and play video games. Together they smoke pot and Nikhil is stoned enough to see Lord Vishnu who gives him the responsibility of saving the world turning into zombies who in turn try to convert others by putting maggots in their food.Toke is an adventure trip of Nikhil and his friends to save the world from the maggots. Now, this is an offbeat and an unusual story which has a lot of humor and witty one-liners that make you smile.

While the blurb of the book raised the expectations and the initial few chapters kept the interest level high, but after a while it failed to hold my interest. This is one book which took me ages to finish though the number of pages were just 216. I believe, the story line just dragged from one ‘happy place’ of the character to the other. I kept waiting for the crazy roller-coaster adventure trip to end and was looking for something sane or to the conclusive end of the mission of saving the world… And the trip finally ended on page number 212 and with that the story ended too! The end seemed like abrupt and hastily written.

The writing is fresh and crisp laced with wit and humor and colorful language. Read the book to find out how Nikhil and his friends saved the world.