HomePERSONALMy Earliest Memory
Plan A to Plan B... We Did It! How Do I Tell Her About You

I have been tagged by the suave Tulika for this post which is about one’s earliest childhood memory. While I was thrilled to see her post and read her precious little memories with a smile plastered all over my face, but when the thought of the task ahead loomed over me, I  sat totally foggy and clueless for a while.

But, I am not the one to give up so easily, so I raked up the memory cells a bit deeper and they didn’t disappoint me.

As my heart took a time travel, it paused the journey when I was around 3 year old. Dad worked in a large Central Government enterprise and and we lived in the company’s colony. The colony was a self sufficient one and had a dispensary, a small market, temple, gurudwara and club facilities which boasted of a sports arena, theater and a library for the employees and their families.

I was bright and smart even as a kid. Do I see some smirks? The legend has it that I used to get vegetables from the shopping centre, all on my own, since I was 3-something-old. Yes, the little me would go all alone with a bag and a list of vegetables (No, it was not like 2 kg onions and 1 kg potatoes…. kind of shopping) to be bought in one hand and a few coins clutched in the other.  Retrospectively, how safe it was then for a little child to be on her own for a little while. I shudder to think if the same was done by a child, in today’s times!

The shopping centre had a bakery, a barber shop, a general store and 2 vegetable shops. This was some 250 meters (0.25 Kms) from our home. I would walk as fast as my little feet would take me. My first stop was at the bakery where I’d buy toffees/candies of my choice, with the coins in my hand. Yeah, that was my incentive for helping Mom. After the goodies were safely tucked in a pocket/bag, I’d move towards my next stop.

I remember the name of the vegetable vendor which Mom and Dad frequented, he was called Lachhoo. So, I’d go to this Lachhoo fellow and hand him over the list of vegetables to be bought. He would weigh and put all the required items in the bag and write the prices against the items in the list. In case, some thing was not available with Lachhoo, I would go to the second vendor (he was called Mota, because he was one! And no, we didn’t knew his real name even then). I would ask him for the missing thing or sometimes Lachhoo would tell Mota to give that item to me and like Lachhoo, he too would jot the amount of the said item on the list.

I would carry the bag home, give the list to Mom, who would check and then keep it in her purse and would settle the amount when she went next to the shopping centre.

Mom tells me that once my bag of vegetables was pretty heavy and I was dragging it along with me. Pal aunty, our neighbour saw me struggling on the road. She told me that she’d help me by carrying the bag for me. And I simply refused. I didn’t let her carry my bag despite her repeated requests and continued with my staggering walk till I reached home and Mom took the bag from me.

Later, Pal aunty visited us and was very upset at the way my Mom was bringing me up!

After the initial mundan, my mom never cut my hair, so, I had pretty long hair. Sometimes, my mom would tie my hair like a little Sikh boy (in the pic). Once, I was dressed up in a shirt and a trouser with my hair tied up like a Sikh boy and I went to Lachoo’s shop as always and gave him the list. He looked at me for a second longer. I still remember the knowing smile he gave me and the little me understood that he had recognized me despite being dressed up like a Sikh boy. 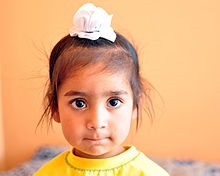 Aah! The lovely and beautiful memories of childhood, I can feel the warmth of nostalgia seeping inside me…. As I continue to smile at my laptop and have that faraway look in my eyes… KG is looking at me strangely as he sips his morning tea.

I am so happy to continue this chain of memories and I now tag the ravishing Richa to share her earliest memories with us!