The Hunt for Kohinoor

Title: The Hunt for Kohinoor 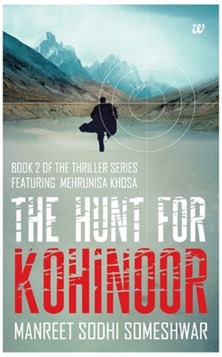 A spine-chilling ninety-six hour hunt through the world’s most dangerous terrain where history collides with gunfire – will Mehrunisa get out of this one alive?

One morning on her way to work, Mehrunisa gets a call that will change her life forever. The truth about her missing father is at her fingertips – but it will take her on the most desperate chase of her lifetime.

A chase that will pit her against hardened Jihadis plotting the deadliest terror attack on India, that will test her mettle against history’s deep secrets, that will teach her that the price of love can mean bloodied hands …

The Hunt for Kohinoor hurtles from from icy Kashmir to snow-clad Hindukush, from the sinister corridors of a military hospital to the warrens of Peshawar, even as the clock counts down to the impending catastrophe.

The Hunt for Kohinoor is a sequel to The Taj Conspiracy. I had read great reviews of The Taj Conspiracy and when I was asked to read and review The Hunt for Kohinoor, I was a bit reluctant to read it without having read the first book in this thriller series. I was told that the prequel is completely independent of the sequel,  just the protagonist and some characters were similar in the 2 books and my doubts were put to rest.

When the blurb of the book mentions that it is 96 hour chase to stop a deadliest terror attack on India, I felt a sense of excitement, so, with great anticipation, I started reading this book.

The books starts with a slow pace as many stories unfold simultaneously in the initial few pages. But it picks up pace soon after and then it is difficult to put the book down. As the story progresses and as the various characters make an appearance in the book, in-depth insights about their life story and their motives are shared. This detailed characterization helps to understand the characters better (though I believe, I read the barbaric ways of Babur Khan thrice in the book at various places!) I really liked how and why the best undercover spy is similar to a snow leopard.

The engaging narration also gives a lot of details of the terrains of North India, Pakistan and Afghanistan where all the action takes place. Also the involvement of CIA, ISI, RAW, KHAD, Al Qaeda, Taliban and various our terrorist outfits in these war-torn areas made for an insightful reading. While reading about the history of the legendary Kohinoor is fascinating, how young boys are brainwashed to become martyrs by acting as suicide bombers is equally stirring. The story helps to understand the point of view from both the sides, that is our side and their side!

The story progresses smoothly and effortlessly as the various plots converge. The language is crisp and clear and paints a vivid description of the scene/plot.

Though I thoroughly enjoyed reading this thriller, I found a few things which I believe fell short of in the story. I felt that the clues were deciphered way too easily. While both the book blurb and the cover showcases Mehrunisa as the protagonist but it is someone else who steals the show in the end. Also, I felt that the ending was a little bit hurried.

Having said that, I loved the thrills along with the twists and turns in The Hunt for Kohinoor and would love to read the first book in the series, The Taj Conspiracy too.

If you are looking for a fast paced thriller which is full of insights, action, adventure and suspense, go for The Hunt for Kohinoor.  Definitely a must read.