HomeBOOKSBook ReviewThe Revenge of Kaivalya
With a Pinch of Salt Breach

The Revenge of Kaivalya

Title: The Revenge of Kaivalya 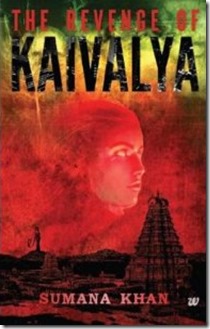 In the lush forests of Sakleshpura, a tribal man dies under mysterious circumstances, his body branded with words in an ancient Kannada script and only the eerie silhouette of a young woman to be seen.

Nearby, in modern-day Bangalore’s concrete jungle, Neel, young, handsome and till now carefree, uneasily wonders if his friends on the party circuit are playing a prank on him, his penthouse reeks of charred flesh and he thought he saw a young woman out of the corner of his eye.

Meanwhile, at the other end of the Sakleshpura forest reserve, newly-married Shivaranjini experiences a devastating seizure, emerging with a terrifying new personality.

What are the mysterious forces at work here and how are all these things related? How does an audacious kidnapping investigated by a svelte police officer fit in? Is it a case of paranormal activity, as believed by the beautiful Tara or something much less sinister? Neel and his friends are caught up in the vortex of these seemingly unrelated events, until the day they unravel the truth and discover the revenge of Kaivalya.

Thrillers excite me and paranormal stories always result in that adrenaline rush, of course from fear! And a combination of these in a book is sure to give a double blast! With great excitement and interest I started reading The Revenge of Kaivalya. Right from the first chapter, the book caught my attention and imagination.

As mentioned above in the blurb of the book, there are multiple plots in the storyline, but they all have a common link and converge at Kaivalya. Kaivalya has nurtured hatred and rage for centuries for the injustice done to her, to return in a terrible form with a power that even Shiva Himself would not be able to confront her. So, Kencha, Neel, Shivranjini and Paramesha bear the brunt of her revenge. Who is Kaivalya and why she wanted to take revenge after years, well, my lips are sealed and you need to read the book to know that!

The Revenge of Kaivalya is not a perplexing whodunit rather it is like a jigsaw puzzle where various different pieces are brought together so that they all fit well and snugly as the story progresses. There’s not a dull moment in the 384 paged book and you keep flipping through the pages, one after the other and putting it down is simply difficult.

What I liked about the book is the vividness with which the scenes came live in front of my eyes. The characterization is  exceptional and all the characters are well developed and there are quite a lot of them in the book. The language is impeccable and flows smoothly. The narrative style is pretty evocative, though I feel that at times it was a bit more wordy and certain parts were superfluous. The suspense and chills are palpable and that’s simply commendable in a thriller.

The climax was a bit of let-down. I wish the concepts / aspects/experiments from Parapsychology were used since Tara had ‘done her research in Parapsychology at UK and travelled to the remotest corners of the world, investigating paranormal phenomenon’. Love at first sight for 2 couples is a bit dramatic but I am not complaining about that!

The Revenge of Kaivalya is highly recommended for its fast paced narrative and a story that will thrill and chill you.