HomeBOOKSBook ReviewHappily Murdered
Beyond School 12 Most Annoying People on Facebook 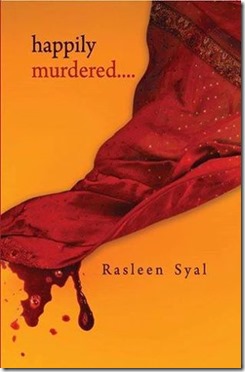 The radiant new daughter-in-law of the influential Mehta family dies mysteriously on the very next night of her wedding. The murder is an inside job, the police are certain. It could be anyone, the adulterous husband, conniving in-laws, jealous friend and the love struck ex-fiancé.

With an aim to save themselves and incriminate others, it is not long before these suspects turn into amateur detectives, hunting for clues and delving into hidden secrets only they can unearth. They coerce, pry and blackmail in an attempt to get to the bottom of this mystery.

Will one of these nine unlikely sleuths finally unravel the mystery behind Gulab’s death and avenge it? Or will the truth die as viciously as Gulab?

With Gulab Sarin dead on her wedding night, the needle of suspicion points towards not one or two people at the Mehta Palace but towards all nine of the family members. Each one of them has a motive, means and opportunity to kill Gulab. With family’s public image at stake, the nine turn into detectives with the sole aim of protecting the family, even at the cost of incriminating an innocent person. They have 15 days to do so as that’s the time frame the Police Inspector has to submit the report. Who could kill Gulab when she was dancing with such joy and contentment in her wedding finery? And thus over discussions, blame games, threats, pressure tactics and snooping around, the family members try to solve a whodunnit.

The characterization in the story is done really well. The characters’ personalities and complexities emerge nicely and this makes the characters alive and believable. Even Gulab’s character which is murdered in the very first chapter, is portrayed suitably such that you empathize with her and join the rest of the family in analysing the clues to bring her justice.

The pace of the story is just right and keeps you glued to the book. As a reader, I thoroughly enjoyed Happily Murdered from start to finish. There are no loose threads as all is wrapped up in a neat little bow towards the end. It is definitely a page turner that kept me up late at night examining the clues, evaluating the witnesses and alibis and determining the probable culprit. And the climax simply blew me away.

Caught a few typos in the book, but that did not dampen the reading pleasure.

A very promising debut by Rasleen, Happily Murdered is a recommended read for all crime, thriller and mystery lovers.