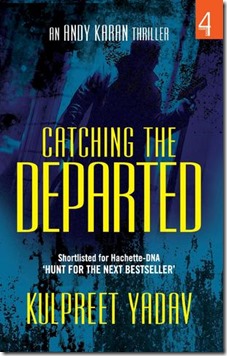 The dead don’t speak. But sometimes they leave a trail. Andy Karan, an investigative journalist, is tasked to probe one such – the death of a local lawyer.

He ends up grievously wounded. His new found love Monica’s life is in danger too.

It’s not that Andy wants to live for ever. But to die at the hands of enemies of the nation will be a shame that will transcend even death.

When you read great reviews of the book all across the web and when the cover of the book says, “Shortlisted for Hachette-DNA – Hunt for the Next Bestseller”,  the expectations are bound to be high. So, with high expectations, I started reading Catching the Departed.

Andy Karan aka Anil Karan Singh left army after 5 years to be an investigative journalist with a magazine. He is sent to a village located on the outskirts of Delhi to investigate the death of a local lawyer and unearth a terror plot. Soon enough he is attacked and had to be hospitalized. With a spate of murders around him, and threat to his life, Andy is determined to get to the root of it, despite dissuasion from his lady boss, Monica. Incidentally, Andy is a part of Army Intelligence and he is caught once again in the whirlwind of chases and murders across Delhi, Mumbai and Murud Janjira. He comes to know of a dangerous mission involving a nuclear bomb. What all will be lost on this ‘unstoppable’ path of destruction? Will Andy put a premature end to the somebody’s evil ambitions? Well, you need to read the book to know that!

The first half of the book has some twists and turns that thrills the reader in you and compel you to keep turning the pages. The book lost its steam by the second half, and somehow it sounded too clichéd and too predictable. I liked the eye for detail in the various scenes and the descriptive style of writing made it very vivid for the reader.

While full justice has been done in carving and shaping Andy’s characters, the other characters lacked depth, personality or individuality. For a character to mastermind terror attacks in the country, I think, KB should have been more wise and shrewd. His plans were not solid enough and his actions were slightly bizarre, especially sleeping with the bomb part! The role of the police seems to be a bit disappointing. Their intelligence network and their action in Murud Janjira was not convincing enough. And Monica’s character could have been a promising one, but she was totally wasted in the story!

Catching the Departed, has all the ingredients of action, drama, love, murders, suspense, but still something is missing in it. I mean, I didn’t get that WOW! feeling during and after having read the book, the feeling that you get after reading a good thriller and that too a book which is touted as the bestseller! A case of high expectations?