HomePERSONALLife's LessonsIt All Happens For a Reason
Usual Places, Unusual Sights When She Smiled

It All Happens For a Reason 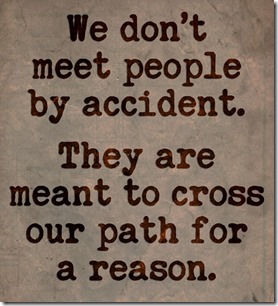 We were the best of friends in school and then we were together in college too. That we stayed close by and our parents were friends too, helped to strengthen our bond. Not a single day passed without our meeting and chatting for hours about just anything and everything.

And then life happened and we moved to different cities. We stayed in touch, initially through letters and an occasional phone call but then it all stopped as schedules and priorities changed. Thanks to the social media, which reconnects old friends, easily. Last year, we ‘met’ each other on Facebook and that helped in re-kindling our dormant friendship. She was visiting my city for some work. I was keen to catch up with her and asked her to stay at our home. She gladly accepted the offer.

When I opened the door for her, we looked at each other for a moment and then without a word, fell into each other’s arms and simply hugged each other tightly. We hit it off like nothing ever changed. We cracked jokes, we laughed and we talked non-stop as we cooked together, sipped tea, went shopping down the apartment for a few things… And then it struck me, something had changed! She had changed!! She always had a smile on her face and a kind word for everyone she had met … my maid, the neighbour we met in the lift, the security guard, the cashier at the store… I was seeing a new side of my friend!

We talked all through the night, remembering and reminiscing about the old days; re-living and revealing the years of life that we spent away from each other.

And it was then I got to know about the series of cruel blows life had thrown her way. She had to deal with several hardships, including the sudden death of her husband in a road accident, her husband’s business partner cheated her out of money and filed some false cases against her, her part-time job which paid peanuts then, the struggle to pay the EMIs for home loan and car loan and then her own accident which kept her bed-ridden for five months. As I shed tears at how unfair and brutal life had been for her, she calmly told me that all these tough times had made her learn lessons she never would have learnt otherwise. The trying times had changed her perspective about life and people.

During those trying times, she experienced it all… pain, tears, grief, anger, frustration. It was during those trying times, she started doing what was necessary for her to survive and then what was possible and soon she found herself doing the impossible. With her grit and determination, with her attitude of gratitude and perseverance, the bumpy road eventually turned smooth again.

During those few hours that we were together, she taught me all about perseverance and the importance of getting back up after a fall (a series of falls in her case). She proved that one not only survives the unexpected and challenging times but also grows from the experience. And that we didn’t meet that day by accident. We were meant to cross each other’s path for a reason!!