HomePERSONALMusingsShould You Expect Privacy in Public Spaces? #MondayMusings
What Happens When You're Married for 20 Years! The Jeera Packer

After a tiring day at work with a splitting headache, you board the evening train to go back home, to find your elderly co-passenger listening to some bhajans on his phone at a decent volume. You look at the phone and will it to stop, but alas it keeps playing mata ke bhajans with the same gusto. You are tempted to ask the ‘Uncle ji’ to lower the volume or use ear-phones but his two smart and extra caring sons stop you from taking that ‘mean’ step. The thing is that the old man is not well and his sons are very attentive to his needs and that touches you. Also, one of the sons has helped you with your luggage, so you are kind of indebted. So, you refrain from doing  anything and just bear the annoying music while the pain in your head flashes hard and hot.

Thankfully, the music stops after an hour or so and everybody goes off to sleep. You toss and turn for a major part of the night because your date with the headache is still not over. You sleep for a while and are woken up rudely by the same bhajans of last night. You look at your phone clock and rub your eyes and look at it again. You begin to have trust issues with your phone so you look outside the window to confirm. It’s pitch dark outside and you kind of apologize to your phone and believe that it had shown the right time. It is the ungodly hour of 4.30 am!

You look around with disbelief. Not a single person in your vision area has even turned and everybody is sleeping peacefully. You try to stare in the old man’s direction, but he is busy staring at his phone screen.

Your brain is directing you to speak up and ask him to stop playing the bhajans but your voice refuses to cooperate. You resign yourself to this irritating situation and take out your Kindle to read. But the words do not register as a throbbing headache is developing beneath your temples.

When you reach home early morning, you fume and fret and pour out all your frustration and anger at the events of last night and early morning at your unsuspecting and sleepy husband. You make him listen to the piece of music that you had recorded on your phone.

Your husband, the good man that he is, makes appropriate noises and tries to smoothen your ruffled feathers but not before saying, ‘Your threshold of patience is pretty low.”

Now, I do not agree with his remark completely. But I’d like to ask you that when in a public space, is asking someone to turn their music down a bad idea? Is it ok for people to play virtual games on their devices with game noises kept on? Is it alright for people to play videos on their phones without using the earphones? Should you be listening to halfalogues of people making long personal calls when at a dinner table with friends or in a cinema? Or listening to people taking calls on speakerphone?

I know that these days mobile devices rule our lives but should that let us forget some basic aspects of decency and manners? I believe, playing music or talking loudly shows a certain selfishness and disregard for public spaces. It is being indifferent to the discomfort of people around you. I somehow feel that all this loud music /talks is encroaching your private space in public and it is pretty annoying, irritating and distracting.

Should you expect privacy in public spaces? What do you think?

Linking this to #MondayMusings 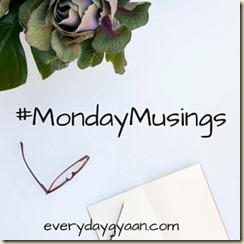