HomeLIFESTYLETravelTravel Misadventures – When I Overslept…
Karnataka College Upcycles 700 Plastic Bottles Into A Stunning Hanging Garden! #WATWB It’s Not That Time of the Year Without… #WordsMatter

Travel Misadventures – When I Overslept…

I have been traveling extensively for work since the last 25 years and have gathered a lot of memories and adventures over the years. While I plan for my trips meticulously, but the best laid plans of mice and men often go awry and I am no exception.

In this travel misadventure series, I plan to share some of my epic travel fails…

After finishing my work during the day at Bikaner, I had to take the evening train which was scheduled to reach Jaipur at 12.15 am.  I was supposed to go home, rest and pick my laptop and projector and leave for Alwar at 7.30 am, the next day.

I took the evening train from Bikaner and was comfortable on my side upper seat in the 2AC compartment. I set 3 alarms on my phone (yeah, I like to take no chances) and even set an alarm in a train app which was supposed to ring 10 minutes before the arrival of Jaipur station. At around 9.30 pm, I pulled the curtains together and decided to catch forty winks.

I woke up to some knocking. Rap…rap. Rap…rap…echoing all around me. I opened my eyes to see the Travelling Ticket Examiner standing near my seat. He asked where I wanted to get down. I sat up, my brain and eyes still foggy from sleep and muttered, “Jaipur.” He said, “Madam, Jaipur has passed half an hour ago!”

I was shell shocked and flabbergasted. After a few seconds of OMGs and WTH… I still couldn’t believe that I had overslept and missed my station. After a few more seconds of pity-party in my head, I galvanized into action and thought of getting down at the next station. And guess what!?! The next halt of the train was at Alwar station which was some 2 hours away. While I was contemplating my next plan of action, the TTE gave me a lecture on what I should have and should not have done! I told him that I travel 10-15 days in a month and have been travelling since the last 25 years and that I travel at all hours of the night and day and that this has happened to me for the first time, but it all fell on deaf ears. Sigh!

The train was reaching Alwar at 2.45 am. I indulged myself in some more pity-party, I kicked myself for sleeping so soundly that I didn’t hear the 4 alarms and missed even the hustle-bustle in the compartment when people are getting in or getting out at a station.  But I am a person of plans and action. I calmed myself and got the rational cogs and wheels of the brain in motion. The calmness also came easily because, I couldn’t do anything but wait for the train to stop at Alwar. 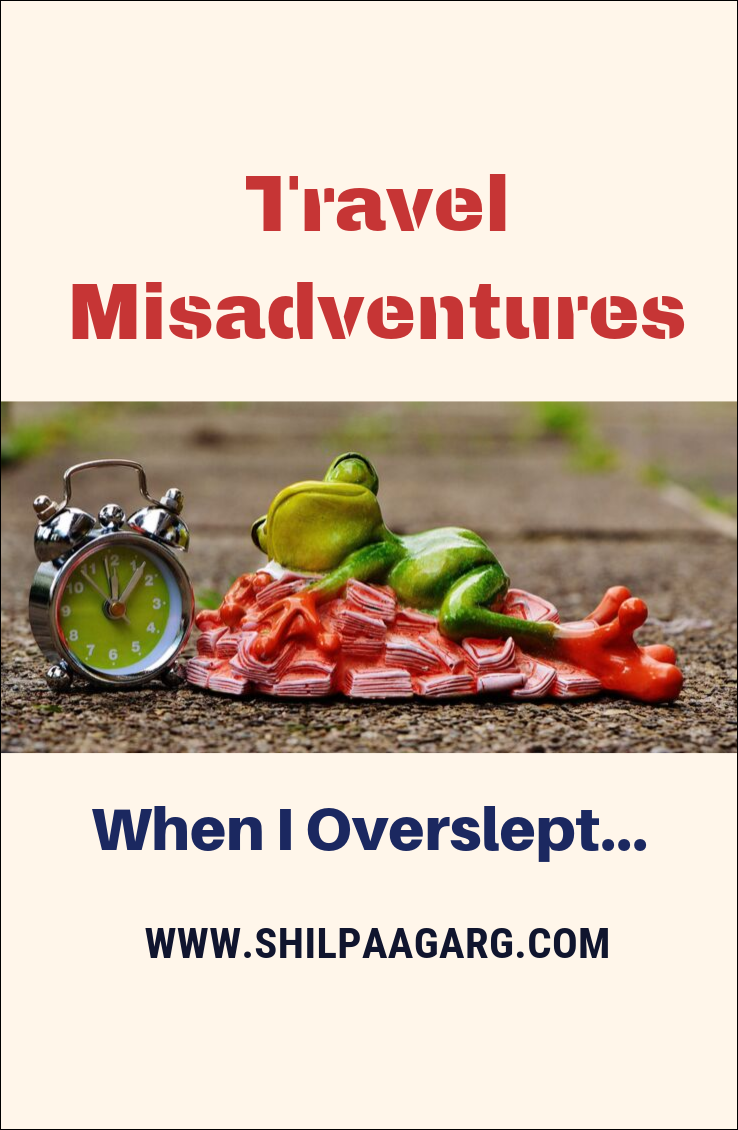 I did some online research and realized that whatever means of transport I took from Alwar to go to Jaipur, I wouldn’t be able to come back to Alwar by 10 am in the morning to conduct my training workshop. So, staying back at Alwar was the only option. Immediately, I searched for some hotels and called one to book a room for me.  Next came the worry about my laptop and projector. Thankfully, I had the presentation in my mail box, so, I could download it and use on someone’s laptop. Getting a projector on a short notice would have been a problem, but I decided to worry about it later.

As I got down at Alwar, the TTE wished me well and told me to take care next time. I smiled through my gritted teeth and rolled my eyes mentally on his suggestion, because the paranoid me would not be able to sleep in a train, ever, again!

I reached the hotel, slept for a while and got up at 7 to call the local manager. I explained my misadventure and requested him to arrange a laptop and projector.  He called back ten minutes later to confirm the availability of both. I was ecstatic only to be devastated the next moment when I realized that I didn’t had fresh set of clothes. Thank God for the hair dryer and iron in the room, I managed to freshen up my clothes. And managed to conduct the training without any hassle as well.

This experience has made me and my entire family super paranoid. So, whenever I travel at odd hours, they set alarms in their phones as well and keep calling me to ensure that I dont sleep. The good thing about this is that we get to talk a lot more though  on one or two instances, I got dirty looks from my co-travellers.

I am not a person who can really sit around and think about regrets because with every bad experience that you have, there is weirdly something good that comes from it. –Winona Ryder

Have you had travel misadventures and debacles? What’s the craziest thing that’s ever happened to you while travelling?