HomeLIFESTYLELiving Better‘Low Marks’ May Not Create ‘Bad Students’
Plastic - Where Does It Go? If We Were Having Coffee... 28th January

Hello Lovely People. My today’s guest is Destination Infinity. He is a Blogger, Video Creator and Sustainable-Living enthusiast based in Chennai. He has been blogging at Destination Infinity for more than a decade now, and believes that learning is a continuous process that starts once we complete our formal education.

Please join me in welcoming DI to my space here and I hope you enjoy his thought-provoking post.
Over to you, DI…

The second world war did not happen because of one man who wanted to plunge the world into a war. It happened because of the millions who obediently and unquestioningly followed his orders.

That’s why obedience may not always be a good thing.

But why am I talking about obedience in an article that’s supposed to be about education and marks?

I’ll give you another insight. Did you think our education system was designed to impart knowledge and encourage creativity?

Think hard before you answer. Because, although on a surface level, you might be tempted to say ‘Yes’, deep under, in your subconscious minds you know that’s not the case.

The education system, at least in India, doesn’t exist to impart knowledge.

Then why do people invest so much money, time, and efforts to educate their children in good schools and colleges? If great minds are not the outcome of the education system, what is?

To answer that question we should answer – What makes some children score more marks over others?

Is it their competitive attitude? Is it their ability to memorize and practice? Is it their patience and discipline to sit through classes, extra classes, tuitions, homework, home studies, etc.?

All the above three, right?

While obedience (in others) has its merits for the few people directing things at the top, it seldom has benefits for the masses who are actually obedient.

Have you noticed politicians or entrepreneurs who are disciplined or obedient? There maybe a few, but by and large it’s the rule-benders and breakers who are at the top.

Although they themselves don’t, they expect everyone under them not to break any rules – and be obedient.

Did you notice the contrast in the above sentence? 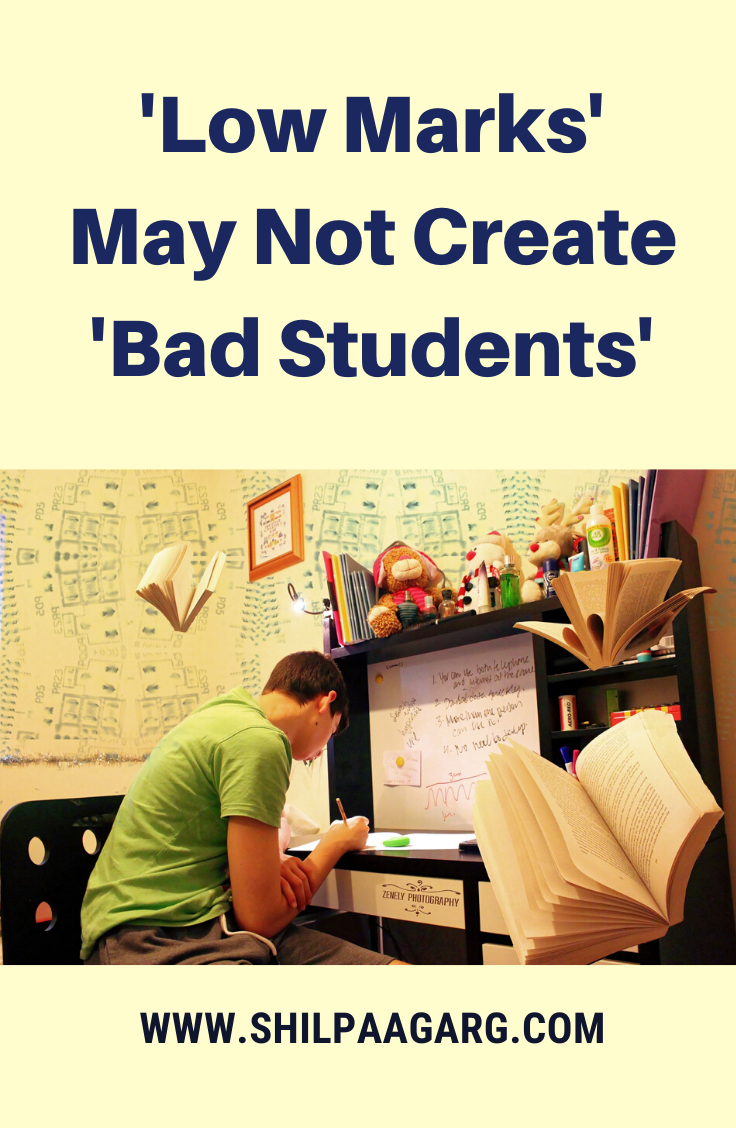 Our education system was built to serve the interests of the few people at the top, while everyone else toils to achieve their bosses’ (usually fat) objectives.

I am not saying that getting great marks/grades is always bad. It’s fine for people who do. They get to have a relatively secure future while being perpetually unhappy about their jobs and life.

However, why do we follow a culture where the failures and dropouts are criticized heavily both by teachers and parents – to the extent of pushing a few of them to even commit suicide – when they are actually good at something else?

Which is:Taking risks, Breaking rules and Creating a new world.

Contradicting my title, I should admit that low marks does create bad students, at least in the Indian educational context.

But low marks don’t create Bad people. Failure in exams doesn’t mean failure in Life. In fact, the opposite is true in many cases. Haven’t we all heard about great founders and leaders being dropouts?

What do you think? What’s your opinion on this subject?