HomeLIFESTYLELiving BetterPlastic – Where Does It Go?
9 Simple Ways to Read More Books This Year 'Low Marks' May Not Create 'Bad Students'

Plastic – Where Does It Go?

Hello Folks. Say Hi to my today’s Guest Blogger Shalini Baisiwala from Shalzmojo. I had the pleasure of meeting her some time back and she comes across as a warm, confident and intelligent woman with inner strength. An interior designer by profession and a blogger by passion. Shalini blogs about her experiences of travel, food, books, mindfulness and sustainable living.

Please join me in welcoming Shalini to my space here and I hope you enjoy her informative and thought-provoking post.
Over to you, Shalini…

Plastic is defined as a man made material which is composed of a wide array of synthetic/non-synthetic organic compounds that can be molded into any shape or size.

We don’t need any introduction to plastic as it pervades every sphere of our daily lives. Be it packaging of products, grocery bags to carry stuff, utility items of daily needs – you name it and it would be made out of plastic. It’s a material of high convenience if you look at its strength, weightlessness, being water proof, and other such qualities.

Where Does It Go?

But the biggest side effect of this product is that it does not decompose naturally. So it needs to be carefully disposed off in conditions suitable to degrade it safely. For you see it releases toxins when left for long in water or soil. These pollute the natural resources in ways that have far reaching consequences than we can ever imagine.

Today our landfills are bursting to seams and there is no end in sight to ever reducing their garbage down to a degradable sense. The plastic waste is mixed with the wet/organic waste in our households which forms a bulk of the waste in the landfills. The non biodegradable waste then chokes the process of decomposition of the organic garbage. So the whole mass keeps accumulating and that leads to the present situation of the landfills.

There is a growing consciousness among the educated and concerned citizens who are now taking up home composting and waste segregation at source. Residential societies and municipalities have woken up to this crisis in fits and starts. The effort is not on a war footing yet but it’s a step in the right direction.

I started garbage segregation at my end in 2014 and faced a lot of challenges in disposing off electrical items, glass bottles, plastic wrappers, etc. Initially I tried giving out the dry garbage to the ubiquitous kabbadiwalas. They were happy to take the cardboard items, paper, magazines but the rest of it was anathema to them. I tried giving it away instead of expecting money in return. But that also didn’t work and I saw them dump what they didn’t want in the community bin.

Internet came to my rescue and led me to an organization called Chintan which deals with waste segregation in a homogenized way. It’s a New Delhi based NGO that processes nearly 30 tonnes of waste daily through recycling, composting and segregation. It not only works with waste but also for the waste pickers through training, awareness and education programs.

There is actually no end to more such progressive and committed waste pioneers like Saahas which is a Bangalore based organization with presence in several Indian cities. They have an office in Gurgaon and their initiative Alag Karo is a great way to involve RWAs into organizing waste segregation in residential colonies.

But just segregation is not enough as the plastic waste needs to be recycled or degraded to get rid of it. Something constructive needs to be done with the collected waste and harness its power. This thought has translated into generating fuel and fashioning products out of waste plastics. More and more such ideas can be seen popping up which is heartening to see and read about.

Aarohana is a Pune based organization that crafts bags and other accessories out of waste plastic. The waste plastic is converted into threads that are then woven by their worker to create home décor items.

Rudra Environmental Solutions is a Pune based set up that innovatively converts waste plastic into poly-fuel which can be harnessed to run boilers, furnaces, agricultural processes, etc. The team collects discarded plastic waste from homes, parks, roads, etc and effectively converts it into fuel in their self designed converter.

Crockery banks have sprung up that lend out steel utensils for community/religious functions in a bid to cut down on the use of non-biodegradable items.

Samadhan Hub Park in Gurgaon is an innovative set up by I Am Gurgaon where artists have collaborated to create artwork out of discarded plastic waste. The idea is to generate awareness about how Plastic is eroding our natural resources and how we must be careful in its consumption.

Despite such innovative efforts, we cannot be blindsided to the fact that we need to not just Reuse, Reduce and Recycle but now REFUSE should be made a big part of our lives. We are consumerists by nature but this has now exploded beyond measured means, leaving behind tonnes of waste everywhere.

When we discard an object, we need to stop and think if indeed its utility is over? Do we really need to replace/upgrade our appliances? Maybe gifting as a trend needs a ban? What happens to an item when it’s thrown out? Where does it end? 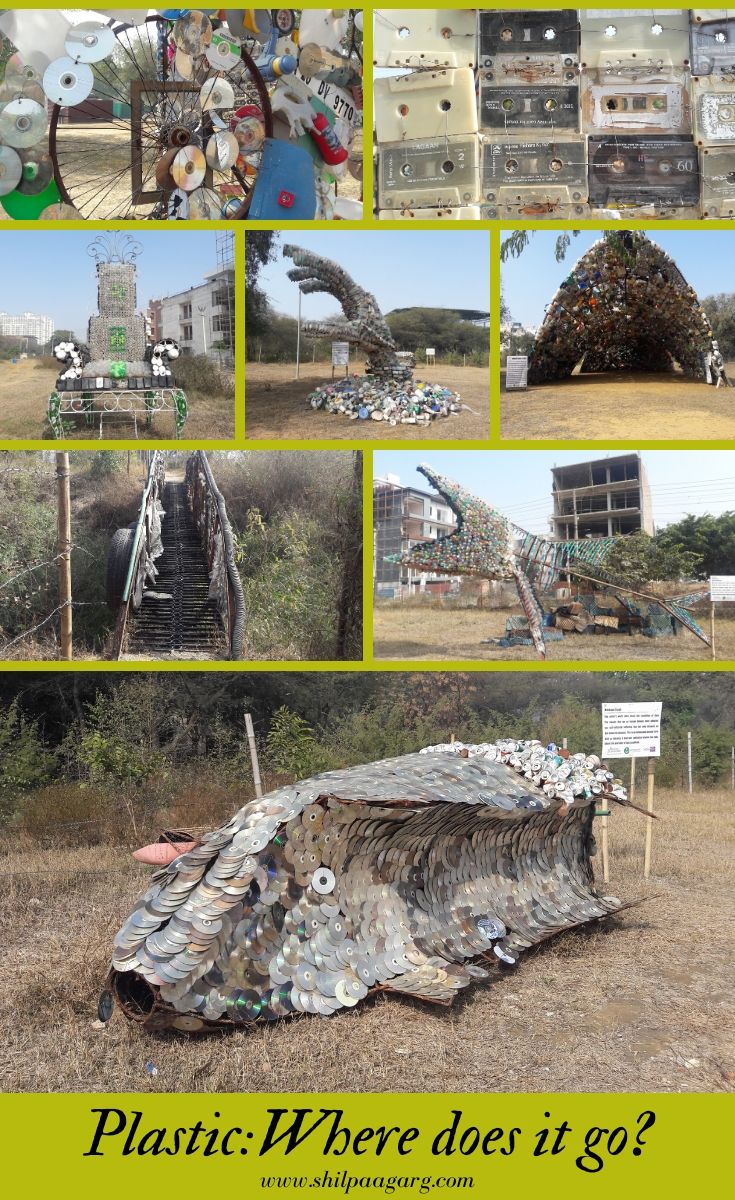 Our wastefulness is not just polluting our natural resources but killing animal life too. Marine animals are the worst affected by this as most of our waste is dumped into rivers which flow out to the sea. The water and soil pollution has increased to such an extent that now our food chain is affected. It’s leading to a huge increase in health disorders which are due to bad diet, lifestyle and poor quality food. Our bodies are no longer the temples they used to be; instead they are a hub of harmful chemicals which are leaching into it via our food.

In October 2019, Indian government had announced a measure to counter plastic menace but then it was rolled back and we are still at square one. More than the government action, we need conscious thought on the part of citizens to tackle this devastating problem. Saying NO to PLASTIC should now be the motto of one and all.

We can all do our bit by refusing bottled water, carrying our own shopping bags, avoiding use of plastic straws, replacing plastic items with organic options, etc – just a few ways in which we can combat this issue without inconveniencing ourselves. The other thing is to DEMAND that our municipal now segregates and collects waste responsibly. We must all come together to combat this growing nuisance and do our bit to clean up the planet now.