HomeBOOKSBook ReviewThe Emperor’s Riddles
Zoutons.com : The Loot is On The Thugs & a Courtesan 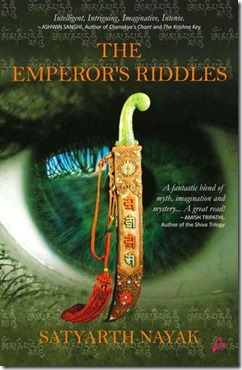 More terrifying than the savage murder of historian Ram Mathur on the ghats of Ganga, are the questions that follow. Desperate for answers, Sia turns to esoteric writer & friend Om Patnaik. But what begins as a hunt for the killer, becomes an extraordinary trail of riddles strewn across the country, that must end at the gates of an enigma.

An ancient enigma so powerful that even gods would kill for it!!!

In another time and space, rules an Emperor who plays with phenomenal forces that make him supreme…who faces these very forces when they threaten the survival of the human race. An Emperor who must ultimately pay homage to the enigma…

As Patnaik and Sia race from one riddle to another, towards a royal secret that has remained alive for centuries….will the final truth, save them or destroy them forever?

The path beckons. Can you solve The Emperor’s Riddles?

Apart from a very interesting and creative visual, three things on the cover page of The Emperor’s Riddles held my attention:

After reading this, my expectations were set for the book. The story started with a bang and kept going that way for quite a while. With each turning page mystery, legends, historical events and mythology gave me company. The story brings to the fore the ancient scientific advancements and the deepest mysteries and secrets buried in our past and how they are connected with the present.

An eminent historian is murdered on the banks of Ganga. What causes a stir is that the pattern of the murder is similar to deaths in the past months. But what is strange is that there’s a symbol scrawled on his face that adds to the mystery and intrigue.

The historian’s daughter, Sia, a writer friend, Patnaik and a film-maker Jasodhara, together go on a treasure hunt that takes them from Mysore to Chidambaram temple in Tamil Nadu to Haridwar, Kongka La near Ladakh to Kolkata… Since, they are on a quest for an enigma so powerful that even the Gods would kill for it, they are hounded by a super smart and slippery murderer and a police officer.

A parallel plot which has some mysterious conversations and glimpses from the life of Buddha, Chandragupta Maurya and Ashoka are interwoven with the murder mystery and the quest for an enigma. I found this parallel plot a bit of a distraction to the main plot.

All this was ok but as I reached halfway, I felt the book lost its steam. I felt that the riddles were solved way too easily and that too without the use of internet (shocking!) And they were way too many. Also, I felt that the dialogues when solving the riddles were a bit forced. While the significance of number 9 fascinated me but showing its importance in every other thing was a bit too contrived. There’s a mix-up between the 2 lady characters Alia and Sia in Chapter 47, which I guess can be rectified in subsequent prints.

The end came as a big surprise which is the hallmark of a thriller though it was pretty rushed. The research done by the author is remarkable with a lot of fascinating and interesting details.

Overall, despite the minor irritants, The Emperor’s Riddles is an intriguing and a gripping read.