Every 40 seconds someone loses their life to suicide.

Suicide does not take away the pain, it gives it to someone else. Every death is a tragedy for family, friends and colleagues. 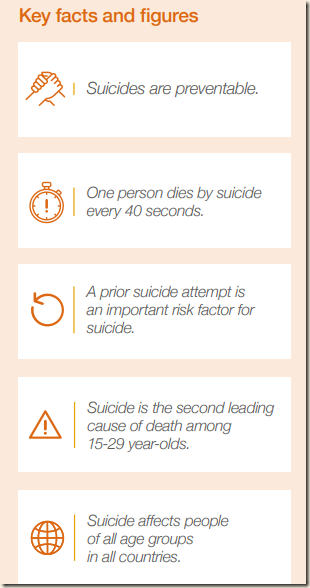 This year, World Health Organization has launched a “40 Seconds of Action” campaign to raise awareness of the scale of suicide around the world and the role that each of us can play to help prevent it. The culmination of the campaign will be on World Mental Health Day, 10 October, the focus of which is also suicide prevention this year.

In this campaign, everyone is encouraged to take “40 Seconds of Action” in order to help:

Put simply, this is an opportunity to show you care.

Here are some more ideas:

Suicide Prevention is possible. If all of us work together, we can increase awareness of this public health issue and get people the support they need.

Here are four ways to reduce the number of suicides:

Suicide has more than just one cause. Factors such as substance misuse and untreated mental illness can lead to a higher risk for suicide in individuals.

3. Identify Whether You or Someone Else Has Specific Mental Health Needs

4. Seek Help for Yourself or Someone Else

If you know someone who has indicated they are contemplating suicide, take them seriously. Encourage them to seek help from a mental health professional and don’t leave them alone. Let’s work together to prevent suicide and make a difference in someone’s life.

My other posts on  #SuicidePrevention are

Stigma : A Barrier to Suicide Prevention (2013)